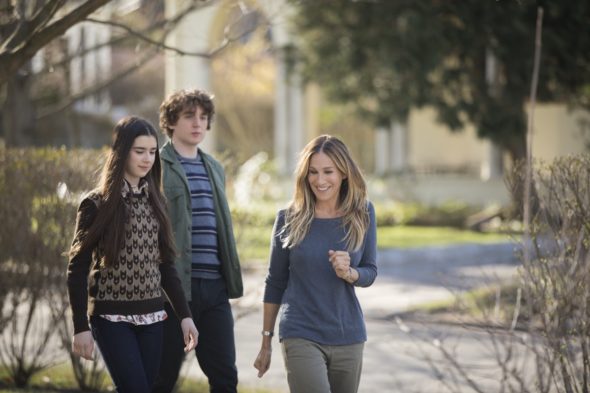 How is life for Frances and Robert during the second season of the Divorce TV show on HBO? As we all know, the Nielsen ratings typically play a big role in determining whether a TV show like Divorce is cancelled or renewed for season three. Unfortunately, most of us do not live in Nielsen households. Because many viewers feel frustration when their viewing habits and opinions aren’t considered, we’d like to offer you the chance to rate all of the Divorce season two episodes here.

An HBO comedy, Divorce stars Sarah Jessica Parker, Thomas Haden Church, Molly Shannon, Talia Balsam, Tracy Letts, Sterling Jerins, and Charlie Kilgore. The story centers on Frances (Parker), a middle-age woman who breaks up with her husband, Robert (Church), the father of her two children. In Divorce, season two, Frances and Robert deal with the fallout from their separation and try to rebuild their lives.

What do you think? Which season two episodes of the Divorce TV series do you rate as wonderful, terrible, or somewhere between? Should HBO cancel or renew Divorce for a third season? Don’t forget to vote, and share your thoughts, below.

I love SJP I still miss watching Sex In The City, I do love this show, although I feel it was a slow start, I kept watching and I’m addicted. I can’t wait to see what’s in store for Francis

I love this show! Please renew another season!

This is a great show! Hoping it comes back to HBO!!

I absolutely love this show, I wish there were more episodes. The characters are superb, well rounded and relatable and the acting is incredible!! I really hope they renew it for another season (3). Sarah Jessica Parker in particular was sublime and looked amazing!! Go Sarah!!

Look forward to every Sunday for this show. It’s got comedy, drama and real life situations. Awesome show!

Please don’t end the episode without us knowing what happens to all the cast members.

I totally agree! I came late to the party, but binge watched both seasons. It’s funny and refreshing! Please renew!