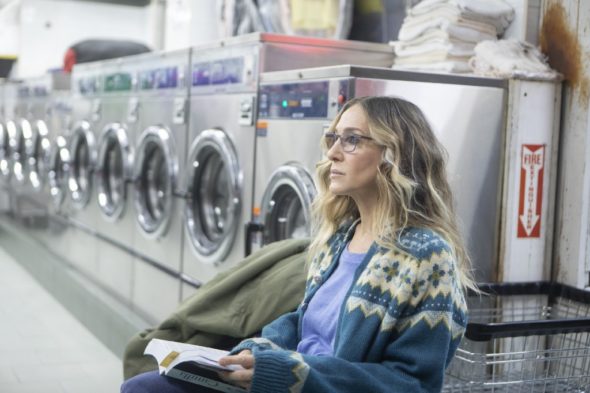 Are Frances and Robert finally over their divorce? Has the Divorce TV show been cancelled or renewed for a fourth season on HBO? The television vulture is watching all the latest cancellation and renewal news, so this page is the place to track the status of Divorce, season four. Bookmark it, or subscribe for the latest updates. Remember, the television vulture is watching your shows. Are you?

An HBO comedy-drama Divorce stars Sarah Jessica Parker, Thomas Haden Church, Molly Shannon, Talia Balsam, Becki Newton, Sterling Jerins, and Charlie Kilgore, with Tracy Letts, James Lesure, and Dominic Fumusa recurring in season three. The story centers on Frances (Parker), a middle-age woman who breaks up with her husband, Robert (Church), the father of her two children. This time out, Frances and Robert have to deal with some bombshell surprises which shake up their post-divorce lives in some unanticipated ways.

The third season of Divorce averaged a 0.07 rating in the 18-49 demographic and 312,000 viewers. Compared to season two, that’s down by 46% and 37%, respectively. Learn how Divorce stacks up against the other HBO TV shows.

Will HBO cancel or renew Divorce for season four? It took a while for them to renew it for a third season. The creative team even assembled a writers room to work out whether they had more stories to tell, before HBO decided to pick it up. There hasn’t been an announcement that this is the third and final season, but the series does not get high ratings, so I wouldn’t be surprised if they decide to end it here. Since that’s just speculation, I’ll keep an eye on the Nielsen ratings. Subscribe for free alerts on any Divorce cancellation or renewal news.

7/1/19 update: It’s been reported that season three will be the final season of the Divorce TV series.

What do you think? Were you hoping that the Divorce TV show would be renewed for a fourth season? Are you sorry that it’s ending?

I love the series divorced…please bring us a season 4….characters are awesome and have great chemistry…stories are very relatable …