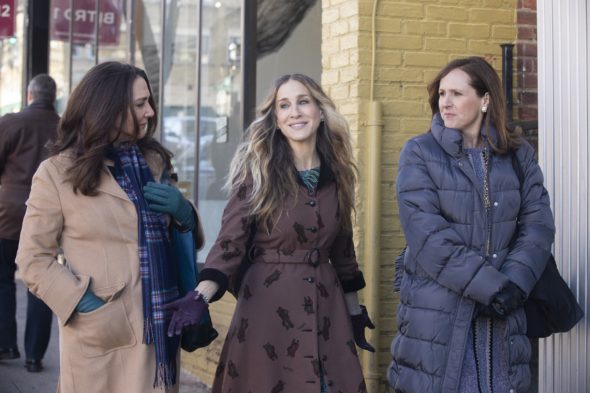 Do Frances and Robert finally come to terms with divorced life during the third season of the Divorce TV show on HBO? As we all know, the Nielsen ratings typically play a big role in determining whether a TV show like Divorce is cancelled or renewed for season four. Unfortunately, most of us do not live in Nielsen households. Because many viewers feel frustration when their viewing habits and opinions aren’t considered, we’d like to offer you the chance to rate all of the Divorce season three episodes here. *Status update below.

An HBO comedy-drama, Divorce stars Sarah Jessica Parker, Thomas Haden Church, Molly Shannon, Talia Balsam, Becki Newton, Sterling Jerins, and Charlie Kilgore, with Tracy Letts, James Lesure, and Dominic Fumusa recurring in season three. The story centers on Frances (Parker), a middle-age woman who breaks up with her husband, Robert (Church), the father of her two children. This time out, Frances and Robert have to deal with some bombshell surprises which shake up their post-divorce lives in some unanticipated ways.

What do you think? Which season three episodes of the Divorce TV series do you rate as wonderful, terrible, or somewhere between? Should HBO cancel or renew Divorce for a fourth season? Don’t forget to vote, and share your thoughts, below.

*7/1/19 update: It’s been reported that season three will be the final season of the Divorce TV series.