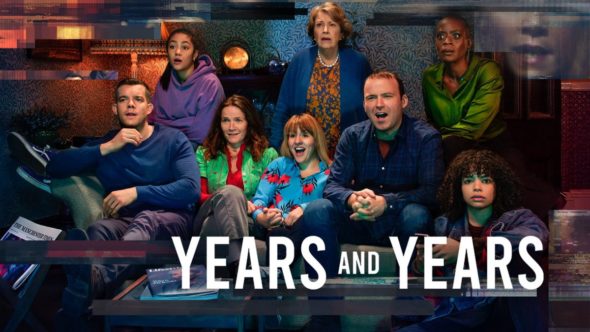 TV show description:
From Russell T. Davies, the Years and Years TV show is a limited series that centers on family members whose lives converge one night in 2019, as political, economic, and technological advances send Britain reeling.

The drama follows a garden-variety family from Manchester, England — the Lyons — over the course of 15 years. During that time, the story follows the members of this close-knit family as they fall in and out of love and deal with the stuff of life like having and rearing children and muddling through this world.

The family peacekeeper is Stephen Lyons (Kinnear), a financial advisor. He is married to Celeste (Miller), an accountant with ambitions.

Stephen’s brother Daniel (Tovey) works as a housing officer. A sister, Edith (Hynes) is something of a live wire and could prove dangerous. The youngest sister, Rosie (Madely) is a single mom of two, who lives with Spina Bifida. Meanwhile, grandmother Muriel (Reid) is a wise woman and always more than willing to share her opinions.

Finally, there is entrepreneur Vivienne Rook (Thompson), who is not a member of the family. A regular on TV news, this businesswoman parlays a viral gaffe into a quest for political power, despite her limited understanding of policy and stark authoritarian streak. Rook is a wildcard and far more dangerous than she first appears.

Series Finale:
Episode #6
As Viv Rook’s regime tightens its grip, the entire Lyons family is forced to take action. Spurred on by both Muriel and Daniel, Rosie faces up to the troops surrounding her home and takes radical action with Lincoln’s help. When Bethany reveals the shocking truth about her father, Edith and Celeste form a secret alliance to stop him. But Stephen is in too deep, as the mysterious Erstwhile Policy turns deadly, forcing Edith and her girlfriend Fran to embark on a reckless, dangerous mission for Viktor’s sake. On a long, dark night, the challenge is clear: can one ordinary family actually change the world?
First aired: July 29, 2019.


What do you think? Do you like Years and Years TV series? Should this HBO TV show have been renewed for a second season?

What a great show. Extremely disappointing that it will not be returning.

Loved this show!! And, very timely, given the political landscape in the United States.

My husband and I both LOVED this series and hope it comes back! It didn’t grab us until the second episode, but then we were hooked!

This series was fantastic. Even if it will not have a season 2, the opportunities for spinoffs are plentiful. Virtually every member of the cast could make for an interesting spinoff.