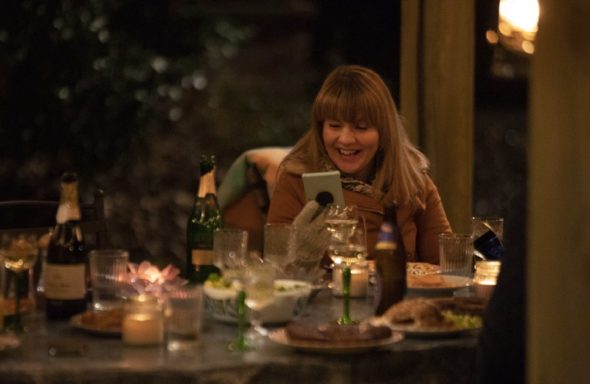 Is the first season of the Years and Years TV show on HBO flying by? As we all know, the Nielsen rating typically play a big role in determining whether a TV show like Years and Years is cancelled or renewed for season two. Unfortunately, most of us do not live in Nielsen households. Because many viewers feel frustration when their viewing habits and opinions aren’t considered, we’d like to offer you the chance to rate all of the Years and Years season one episodes here. *Status update below.

An HBO drama, Years and Years stars Emma Thompson, Anne Reid, Rory Kinnear, Jessica Hynes, Russell Tovey, Ruth Madeley, T’Nia Miller, Dino Fetscher, Lydia West, Jade Alleyne, and Maxim Baldry. The series follows a garden-variety family from Manchester, England — the Lyons — over the course of 15 years. During that time, the story centers on the members of this close-knit family as they fall in and out of love and deal with the stuff of life like having and rearing children, and muddling through this world. Meanwhile, entrepreneur Vivienne Rook (Thompson) parlays a viral gaffe into a political run, despite her ignorance of policy and authoritarian bent.

What do you think? Which season one episodes of the Years and Years TV series do you rate as wonderful, terrible, or somewhere between? Should HBO cancel or renew Years and Years for a s second season? Don’t forget to vote, and share your thoughts, below.

*6/25/19 update: The series creator has made it clear that there won’t be a second season.