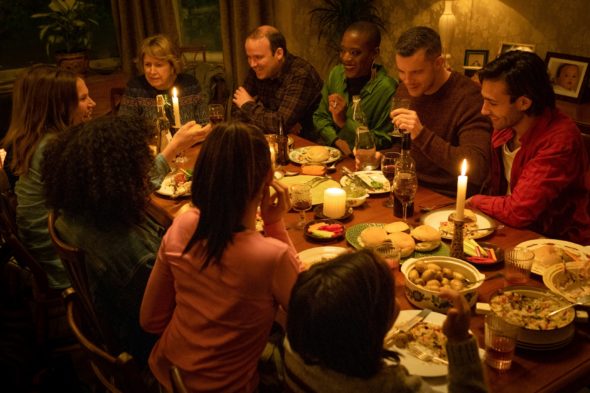 Will the years turn into decades? Has the Years and Years TV show been cancelled or renewed for a second season on HBO? The television vulture is watching all the latest cancellation and renewal news, so this page is the place to track the status of Years and Years season two. Bookmark it, or subscribe for the latest updates. Remember, the television vulture is watching your shows. Are you?

Airing on the HBO premium channel, Years and Years stars Emma Thompson, Anne Reid, Rory Kinnear, Jessica Hynes, Russell Tovey, Ruth Madeley, T’Nia Miller, Dino Fetscher, Lydia West, Jade Alleyne, and Maxim Baldry. The series follows a garden-variety family from Manchester, England — the Lyons — over the course of 15 years. During that time, the story centers on the members of this close-knit family as they fall in and out of love and deal with the stuff of life like having and rearing children, and muddling through this world. Meanwhile, entrepreneur Vivienne Rook (Thompson) parlays a viral gaffe into a political run, despite her ignorance of policy and authoritarian bent.

The first season of Years and Years averaged a 0.04 rating in the 18-49 demographic and 205,000 viewers. Learn how Years and Years stacks up against the other HBO TV shows.

Although it premiered with low numbers, it is still too early to use the ratings to predict whether HBO will cancel or renew Years and Years for season two. There’s also a question on whether this is a one-and-done miniseries, or if it is a limited event with the potential to continue. In at least one HBO press release, the cable network referred to it as a “miniseries.” That was notable, because the terminology has largely fallen out of fashion. That was only one release though, and another network statement discussed the “season finale,” not the “series finale,” so their intentions are not clear.

On top of that, Years and Years originated on UK’s BBC One, so the decision to renew or cancel isn’t HBO’s alone. So often it is money that answers these questions. If it’s a hit on both sides of the pond, and there’s creative will to continue, perhaps there will be another season. For now, I’ll keep a hungry eye on the Nielsens and update this page as the season progresses. Subscribe for free Years and Years cancellation or renewal alerts.

6/25/19 update: The series creator has made it clear that there won’t be a second season.

What do you think? Were you hoping that the Years and Years TV show would be renewed for a second season? Would you have watched more of these characters.

Years and years needs to continue. The first season was just baiting the hook. We can’t be left wondering if society wins out or politics reins supreme!