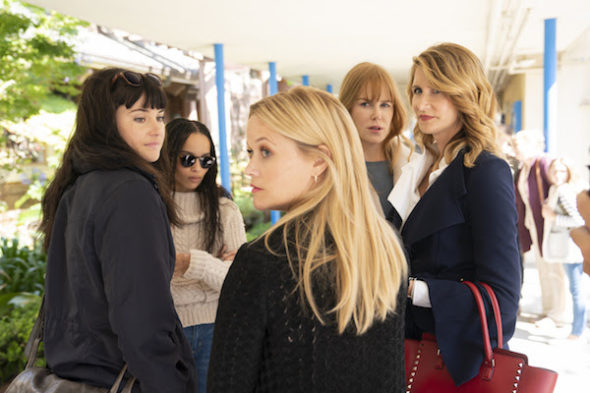 The drama unfolds in the serene seaside setting of Monterey, California, where nothing is just how it seems. The cast includes Kidman, Reese Witherspoon, Laura Dern, Shailene Woodley, Zoë Kravitz, and Adam Scott.

Season two of Big Little Lies will debut on HBO in June.

On the surface, in the tranquil seaside town of Monterey, California, everything seems the same. The mothers continue to dote, the husbands support, the children remain adorable and the houses are just as beautiful. But the night of the school fundraiser changed all that, leaving the community reeling as the “Monterey Five” – Madeline, Celeste, Jane, Renata and Bonnie – bond together to pick up the pieces of their shattered lives.

Created by David E. Kelley, teleplays by David E. Kelley and story by Kelley and Liane Moriarty, and based on the novel by #1 New York Times bestselling author Liane Moriarty, BIG LITTLE LIES returns for its seven-episode second season in June, exclusively on HBO. The new season explores the malignancy of lies, the durability of friendships, the fragility of marriage and, of course, the vicious ferocity of sound parenting. Relationships will fray, loyalties will erode…and the potential for emotional and bodily injury shall loom.

The show will also be available on HBO NOW, HBO GO, HBO On Demand and affiliate portals.

The Wrights: Celeste and the twins, Max and Josh (Cameron and Nicholas Crovetti).

BIG LITTLE LIES was filmed in and around greater Los Angeles and the Monterey Peninsula.

What do you think? Are you a fan of Big Little Lies? What do you want to see happen in season two?