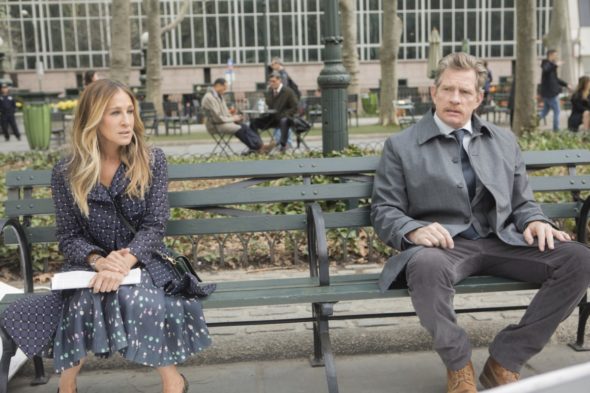 Is it truly all over for Frances and Robert? Has the Divorce TV show been cancelled or renewed for a third season on HBO? The television vulture is watching all the latest cancellation and renewal news, so this page is the place to track the status of Divorce, season three. Bookmark it, or subscribe for the latest updates. Remember, the television vulture is watching your shows. Are you?

Airing on the HBO premium channel, Divorce stars Sarah Jessica Parker, Thomas Haden Church, Molly Shannon, Talia Balsam, Tracy Letts, Sterling Jerins, and Charlie Kilgore. The story centers on Frances (Parker), a middle-age woman who breaks up with her husband, Robert (Church), the father of her two children. In Divorce, season two, Frances and Robert deal with the fallout from their separation and try to rebuild their lives.

The second season of Divorce averaged a 0.13 rating in the 18-49 demographic and 495,000 viewers. Compared to season one, that’s down by 30% in the demo and down by 17% in viewership. Learn how Divorce stacks up against the other HBO TV shows.

Will HBO cancel or renew Divorce for season three? The first season had a lackluster showing and season two hasn’t done any better. The network, which isn’t ad-supported, must believe in it though, or at least feel like they’re getting enough bang for their buck. I suspect it will be renewed for a third season but I’ll update this page once I hear official news. Subscribe for free alerts on any Divorce cancellation or renewal news.

What do you think? Are you glad that the Divorce TV show has been renewed for a third season? How would you feel if HBO had cancelled this TV series, instead?

Hey, Tina and Bruce had it right, had seen very little ads. for it. I ran into it thinking I would just get pointers. lol!!! But, omg I fell in love with SARAH and THOMAS all over again. I loved it from the first show to watching every night until I caught up. can’t wait to see where the show goes. IT’S MY NEW FAVORITE SHOW!!!!!!!

Love this show! Awaiting season 3. Want to to see how things will play out with the new family dynamic.

Thomas Haden Church is so awesome! I love this show. However, 30 minute episodes are ridiculous. Give us more!!

We all love it and were hoping for more. Thomas Haden Church makes the show!

YOU GUYS NEED TO GO BACK & LOOK AT HOW MANY VIEWERS HAVE CAME IN THROUGH THE MIDDLE OF THE SEASON AND THEN WENT BACK AND WATCHED FROM THE BEGINNING BECAUSE THEY DID NOT KNOW THAT IT “SO DAMN GOOD!!!” WE DIDN’T EVEN KNOW THAT IT EXISTED BECAUSE THERE WAS SO LITTLE ADVERTISING!!! WE HAPPENED TO RUN INTO IT BY ACCIDENT, BUT WE “***LOOOVVVEEE***” THIS SERIES!!!! PLEASE, HBO, DO NOT CANCEL THIS SHOW!!! IT IS AMAZING AND IF YOU, PROPERLY, ADVERTISE IT, PEOPLE WILL SHOW UP TO WATCH IT!!!! STOP GOING BY THE “INSTANT RATES” AND WAIT FOR THE PEOPLE… Read more »

Exactly my sentiments I don’t think they advertise this show correctly. So glad I found it! I went back and watched season 1.

Love this show!! Please do not cancel. Love the natural divorce relationship between SJP and Thomas Hayden Church they are great! I can’t get enough of this show. I am addicted I always want more when each episode is over!

I loved both seasons of Divorce and all of the characters. I would love to see a Season 3… Can’t wait!