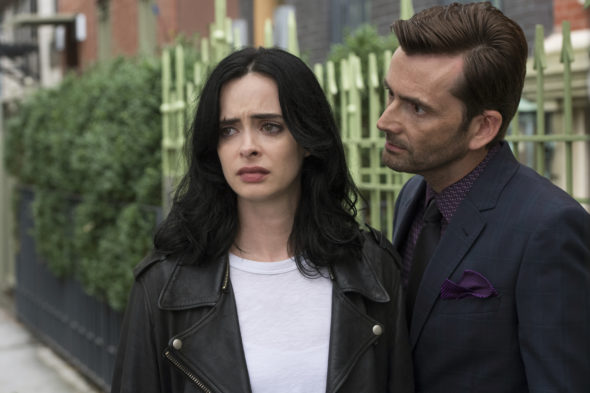 A Netflix superhero drama, Marvel’s Jessica Jones stars Krysten Ritter as Jessica Jones, Hell’s Kitchen’s heavy-drinking, hard-edged detective. The season two cast also includes Rachael Taylor, Carrie-Anne Moss, Eka Darville, Janet McTeer, and J.R. Ramirez. Since Kilgrave (David Tennant) is dead, in the second season, Jessica tries to get her life back on track. However, New York City now knows her as a super-powered killer. When a new case makes her makes her face and who and what she is, Jessica digs deeper into her past, for a better understanding.

Unless they decide to publicize its viewership, it is hard to predict whether Netflix will cancel or renew Marvel’s Jessica Jones for season three. Flying blind, I think it will score a third season pickup. The first season was popular with viewers, and Netflix has a sizable chunk of the Marvel television franchise. Still, anything can happen, so I’ll keep an eye on the trades and update this page with breaking news. Subscribe for free Marvel’s Jessica Jones cancellation or renewal alerts.

What do you think? Do you expect the Marvel’s Jessica Jones TV show to be renewed for season three? How would you feel, had Netflix cancelled this TV series, instead?

When it comes to Marvel, this show seems to get back seated. It is one of the best! Renew!

Second series seems grittier and nearer the knuckle but on balance very good. I hope there will be a 3rd season and perhaps a little less focus on Trish who is not the most likeable character. Good to see Kilgrave again who is a sensational villain. Hogarth has further possibilities too. More please.

She was born to play Jessica Jones

Yes I absolutely love this show.. I love her crude attitude she is a kick ass female character.. I highly relate to her character and the actress used to live 7 minutes from where I live and I never knew it so glad a female from a small Podunk town can make something of themselves