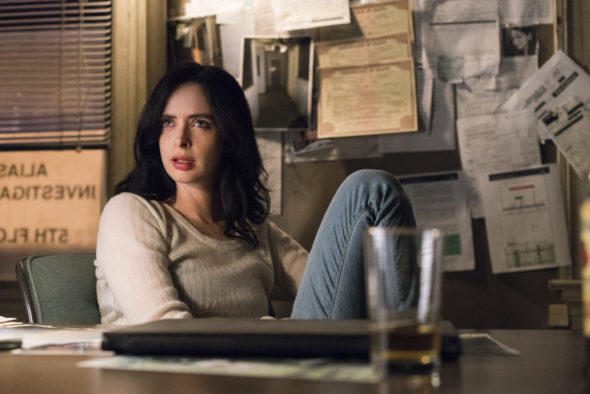 Are you a big fan of Marvel’s Jessica Jones? Executive producer Melissa Rosenberg recently spoke with Deadline about the Netflix series’ third and final season.

In the interview, Rosenberg revealed the writers knew season three would be the end for Marvel’s Jessica Jones and were able to craft a satisfying ending:

Well, then we realized that, oh, Netflix was canceling the Marvel shows and we would definitely be next. So we had a ton of time to come to a satisfying end. It was really great, you know? We all kind of ended up leaving together and bringing it to a conclusion that felt was right to us.”

And was Rosenberg satisfying with the end of the Netflix series?:

I feel like it’s three acts of a play, you know? It’s really a complete journey for all the characters, not just Jessica. I have to tell you, I feel incredibly proud of what was done. It did feel like it was a full story. It was a complete story and arc for our character. So that it ended was really right I think. It was serendipitous in a way.”

What do you think? Have you seen the final season of Jessica Jones yet? Would you have watched a fourth season?

I really think there are a few more GOOD seasons in this series W/O being bogged down. I do get very frustrated with some cancellations this one seems too soon. In the past there have been series that go on too long . I have enjoyed series like “Longmire” because it had a good run w/o being boring enough to replay & enjoy later. Just a few more seasons with “Jessica Jones” would be great please reconsider.

I really enjoyed the Jessica Jones series. I would have loved more. It was edgy and fun. I really liked the character’s down play of her abilities. The cast was refreshing and fun. I really wanted more. Thank you for giving us what you could.