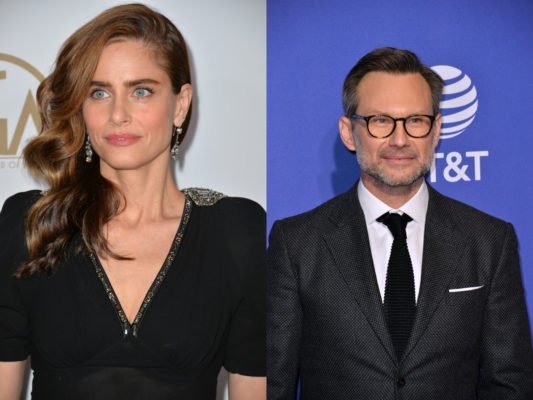 The new season of the anthology series “will be based on another epic true tale of love gone wrong — a story that spans the 1960s to the ’80s, through the breakdown of a marriage that Oprah deemed one of “America’s messiest divorces” even before it ended in double homicide.”

On season two of Dirty John, Peet will be playing “Betty Broderick, the perfect Southern California blonde wife and mother” while Slater portrays her husband, Dan.

USA Network has not yet announced a premiere date for season two of Dirty John, but you can read more info below:

UNIVERSAL CITY, CA – September 9, 2019 – USA Network announced today that Amanda Peet (“The Romanoffs”) and Christian Slater (MR. ROBOT) will star in the second season of anthology series DIRTY JOHN, titled DIRTY JOHN: THE BETTY BRODERICK STORY. This second installment will be based on another epic true tale of love gone wrong — a story that spans the 1960s to the ’80s, through the breakdown of a marriage that Oprah deemed one of “America’s messiest divorces” even before it ended in double homicide.

Peet will play Betty Broderick, the perfect Southern California blonde wife and mother. Married to her handsome college boyfriend Dan, played by Slater, Betty charms everyone she meets. After years of sacrifice and suffering while supporting Dan through both medical and law school until he exploded into the San Diego legal community as a superstar, Betty is finally enjoying the fruits of their labors. That is, until Dan hires Linda, a bright, beautiful young woman without baggage with whom he can happily forget the struggles of his past. Betty’s attempts to fight back and enraged refusals to accept reality only serve to isolate and destabilize her until she loses her very identity. And Dan’s cold confidence blinds him to the bear he has created, and won’t stop poking … until it’s too late.

“The first season of DIRTY JOHN was a story of twisted love and coercive control – and both these insidious elements are also present in and integral to the story of Betty Broderick, whom I have wanted to write about since I became a writer,” said series creator Alexandra Cunningham. “I can’t wait to see Amanda and Christian bring it to life.”

Produced by UCP, DIRTY JOHN moves from Bravo to USA, cable’s #1 entertainment network, for its second season. Season 2 is written by Cunningham, who also executive produces along with Jessica Rhoades (“The Affair,” “Sharp Objects”), season one star Connie Britton, Atlas Entertainment and Los Angeles Times Studios. The directors of season 2 will be led by Maggie Kiley (“Riverdale”) who will serve as co-executive producer/director on the season and direct four episodes, including the premiere and finale episodes. Additional directors include Kat Candler (“Queen Sugar”), Meera Menon (“The Terror”), Shannon Kohli (THE MAGICIANS) and showrunner Cunningham, who will make her directorial debut. Netflix co-produces and has first-run rights to the series outside of the U.S. The series is currently in production in Los Angeles on the Universal Studios lot.

DIRTY JOHN’s first season, based on the Los Angeles Times articles and breakout true crime podcast of the same name, premiered on NBCUniversal’s Bravo and was 2018’s second highest rated new cable scripted series (ad-supported and premium) among P18-49. It had the largest ratings growth from premiere to finale among any new ad-supported cable scripted series in all key demos. Season 1 also garnered Bravo its first Golden Globe® nomination (Best Performance by an Actress in a Limited Series or a Motion Picture Made for Television for Connie Britton).

Amanda Peet was most recently seen in “The Romanoffs” and “Brockmire.” Before that, she starred in “Togetherness,” created by the Duplass Brothers, and Aaron Sorkin’s “Studio 60 on the Sunset Strip.” She appeared in the films “Something’s Gotta Give,” “The Whole Nine Yards,” “Syriana,” “Please Give” and “Igby Goes Down,” among others. Her play “The Commons of Pensacola,” which was produced by Manhattan Theatre Club, starred Blythe Danner and Sarah Jessica Parker. Her most recent play, “Our Very Own Carlin McCullough,” debuted last year at The Geffen Playhouse in Los Angeles.

Christian Slater will next reprise his role as the title character in USA’s award-winning, acclaimed series MR. ROBOT, which returns for a final season on October 6. His performance has earned him a Golden Globe® and Critics Choice Award. Most recently, Slater starred alongside Glenn Close in Bjorn Runge’s “The Wife.” Slater’s additional credits include “Archer” and “Nymphomaniac.” It was recently announced that Slater has joined UCP’s adaptation of the hit Wondery podcast DR. DEATH alongside Jamie Dornan and Alec Baldwin.

What do you think? Did you see season one of Dirty John? Will you watch season two?

Watched 1 st season & will enjoy the next 🙂

I watched Season 1 and plan on watching Season 2.