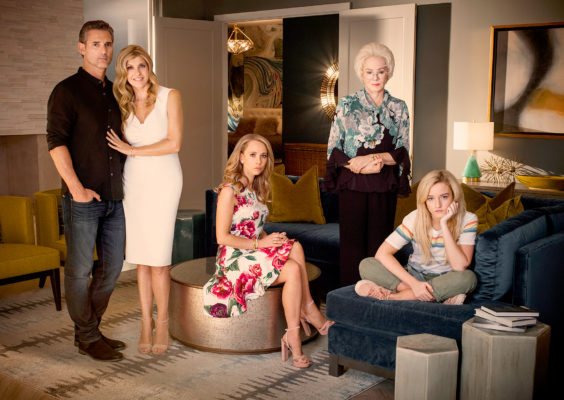 TV show description:
A scripted true crime anthology series, Dirty John is based on a podcast of the same name by Christopher Goffard. The series was created and written by Alexandra Cunningham.

In the first season, a romance spirals into a web of secrets, denial, and manipulation with horrific consequences for a family. Debra Newell (Britton) is both beautiful and successful. She seemingly has a perfect life in Newport Beach, a very desirable coastal city in California. Unfortunately, this middle age lady doesn’t have love.

When she finally meets charming and handsome doctor John Meehan (Bana), Debra is quickly swept off her feet — much to the dismay of her daughters, Terra (Julia Garner) and Veronica (Juno Temple). The tension leaves the girls no choice but to investigate the stranger their mother adores.

With a troubled family history, the backstory of Debra and her mother Arlane (Smart) provides insight into why she may have been so vulnerable to John’s charms. As Debra is drawn deeper into his lies and psychological manipulation, horrific events unfold.

Season two of the anthology series follows a shocking story of love, betrayal, and death that’s based on the lives of Betty and Dan Broderick. Betty (Peet) was the perfect Southern California blonde wife and mother. Married to her handsome college boyfriend, Dan (Slater), Betty charms everyone she meets. She sacrifices and suffers for years while supporting Dan through both medical and law school. He ultimately becomes a superstar in the San Diego legal community and Betty can finally enjoy the fruits of their labors. But then, Dan hires Linda (Keller), a bright, beautiful young woman. With Linda, he can happily forget the struggles of his past but, what about Betty?

What do you think? Do you like the Dirty John TV show? Do you think it should be cancelled or renewed for another season?

Renew my son and I were hooked. Can’t wait for season II

Please keep this on air, renew

Please renew for a second season and hopefully additional Seasons after that. The actor and actresses are so convincing that they leave me hanging at the edge of my seat during each episode.

I love Dirty John! It’s a grown-up series & the actors r all terrific! Only problem I have is Connie left my FAV new tv show “911” to do this series! ( Connie p!ease go stop in & say hi to 911 now & then will u??). Dirty John could be the story of Vicki & Brooks from RHOC….So glad to see everyone has grown a brain!!!

This show is awful. Don’t we have enough shows about violent men conning wealthy women? Even Erica Bana and Connie Britton can’t save this podcast adaptation. Britton’s character is so unlikeable and dumb you want to throw something f at the TV to shake the stupid out of her. The daughters whiney voices are just unbearable. And Bana looks like a soulless, homeless sociopath with a death stare. Do yourself a favor and watch Friday Night Lights to remember why you love Connie Britton. #Pass

Theres enuf violent men in the world we dont need more abusive men on tv. Done with it. Im surprised connie would play this part. Loved her in Nashville, not in this.

I had really high hopes for this show, but the two daughters drive me absolutely batty. I’m not sure if I can make it through all of the episodes.

I love the show! Can’t wait for next episode!

I agree! I love the show & the entire cast. Hoping for Season 2!!

We love Dirty John and can’t believe you are talking about canceling it. Connie Brittin is wonderful as the dumb unsuspecting girlfriend turned wife who tuffins up in the 6th episode . Eric Bana plays the creepy excon boyfriend turned husband out for Connie Brittain ‘s money. Great show and fact based with embellishments. Hoping for a great finale or 2nd season