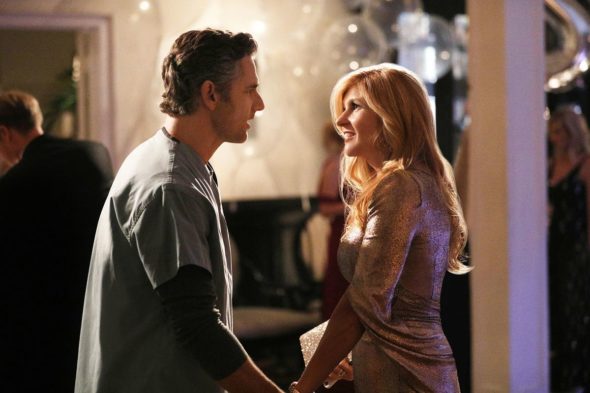 Will the first season of the Dirty John TV show on Bravo leave viewers craving for more? As we all know, the Nielsen ratings typically play a big role in determining whether a TV show like Dirty John is cancelled or renewed for a second season. Unfortunately, most of us do not live in Nielsen households. Because many viewers feel frustration when their viewing habits and opinions aren’t considered, we’d like to offer you the chance to rate all of the first season episodes of Dirty John, below.

A Bravo true-crime anthology series, the first season of Dirty John stars Connie Britton, Eric Bana, Juno Temple, Julia Garner, and Jean Smart. In the story, middle-age Debra Newell (Britton) seemingly has a perfect life but she doesn’t have love. When she finally meets handsome doctor John Meehan (Bana), Debra is quickly swept off her feet — much to the dismay of her daughters, Terra (Julia Garner) and Veronica (Juno Temple). The backstory of Debra and her mother Arlane (Smart) provides insight into why she may have been so vulnerable to the charms of a man who is not who he seems to be.

What do you think? Which first season episodes of the Dirty John TV series do you rate as wonderful, terrible, or somewhere between? Should Bravo cancel or move ahead with the second season of Dirty John? Don’t forget to vote, and share your thoughts, below.

I ABSOLUTELY love love this show! It’s my #1 show at this time.

I truly likedthis program, its an eye opener gor us women..
Hope it comes back…

I love the show, thought it was very interesting and look forward to seeing more of “Dirty John” and love Connie Britton!! I like how the show, showed different places and how John interacted with her family. Show more!!!

It’s my belief, Julia Garner, in real life, lives on Balboa Penninsula, probably down by the Wedge. This is the same neighborhood where the show “Dirty John” is suppose to take place. Julia doesn’t have to “act.” All she has to do is be herself. She is already a Newport Beach Hottie. Typical Beach Blond Babe. This is her perfect part—-being herself! The show is great. I’ve lived in NB for the past 50 years. The show people must have found Julie on the beach, or in the local grocery store. She eppitimizes Newport Beach. Can’t wait until next weeks’… Read more »