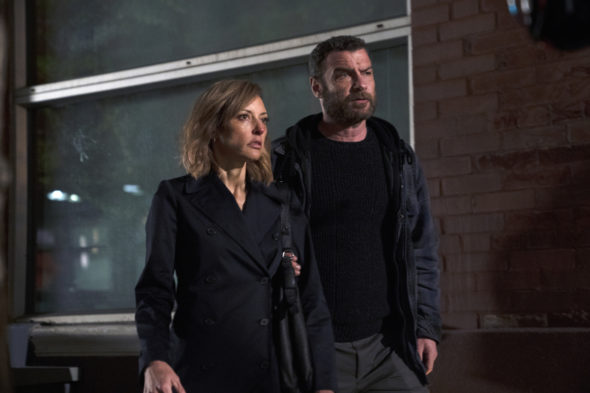 How well is Ray’s fresh start working out during the sixth season of the Ray Donovan TV show on Showtime? As we all know, the Nielsen ratings typically play a big role in determining whether a TV show like Ray Donovan is cancelled or renewed for season seven. Unfortunately, most of us do not live in Nielsen households. Because many viewers feel frustration when their viewing habits and opinions aren’t considered, we’d like to offer you the chance to rate all of the season six episodes of Ray Donovan below.

What do you think? Which season six episodes of the Ray Donovan TV series do you rate as wonderful, terrible, or somewhere between? Should Showtime cancel or renew Ray Donovan for a seventh season? Don’t forget to vote, and share your thoughts, below.

12/20/18 update: Showtime has renewed Ray Donovan for a seventh season.

Please bring back for 8th Season, was riveting throughout each season, waiting a new season
to begin. Enjoyed all the characters especially Ray, he lives the role, his rough yet sexy way was very exciting. Made Sunday night TV viewing that many of us were anxiously looking forward to enjoying again.

Most being show back, as a huge fan, we must have more!

Great Season, this was a new direction. Renew Day Donovan , one of the best shows , great show !

I loved the first five seasons, but season six feels like it’s a new city without a new direction or creativity. Rather than a new beginning, it just feels like rehashed dark actions by depressed lost characters…now without heart or meaning. Sad and disappointing. A great show that’s lost its way.

My top three series of all time!