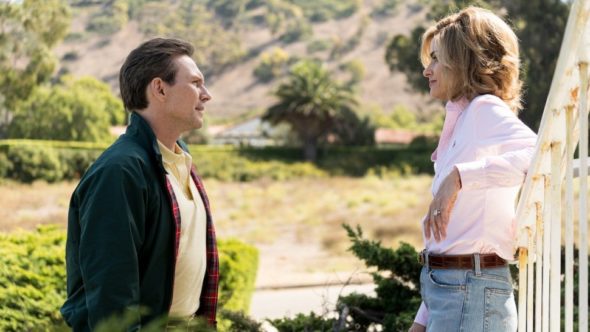 Dirty John has just wrapped its second season, and now the showrunner is looking ahead to season three. The series has not yet been officially renewed for a third season though.

Alexandra Cunningham said the following about the future of the USA Network series, per The Hollywood Reporter:

“The stories we’ve been talking about are definitely different milieus than Orange/San Diego counties. But also, we consider our unifying principles to be love gone wrong and coercive control. … The thing I would love to do, all things being equal, to me the ultimate example of love gone wrong is familial. Not romantic love, not a couple, not a boyfriend-girlfriend like the first season or a married couple divorcing, but mother-child, siblings. Especially parentally, I think that’s where love gone wrong truly begins, that the love coming from a parent is not appropriate or twisted or not real, that is obviously one of the things that contributes to people’s future behavior. That’s something I’d love to explore if given the chance.”

The showrunner did reveal conversations about season three of Dirty John would start soon.

What do you think? Do you want another season of the Dirty John TV series?

Yes I would absolutely love a 3rd season of Dirty John! !

Yep I’d totally watch a 3rd series. Looking forward to seeing what the network comes up with

I really liked season 1 and season 2. But if a third season is made, does it really have to be called dirty John?

Yes! I got my husband hooked on the Betty Broderick story. As so am I. I am looking to Season 3.

I would definitely watch season 3. It will give closure.

I will definitely watch another season of dirty John the first two are fantastic!

The only Dear John I remember was the First miniseries. I had heard somewhere about a Series for the show but I’ve never seen or even found any listed in the TV Guide. Season three? I haven’t even seen Season one or two. I have the station but I guess it just wasn’t advertised enough because it went right by me and now FiOS wants to charge me to see past episodes. Forget about it.

yes! the first 2 season were amazing. Love love this show. Please have a third ,fourth season and on and on

Show was excellent I enjoyed every episode