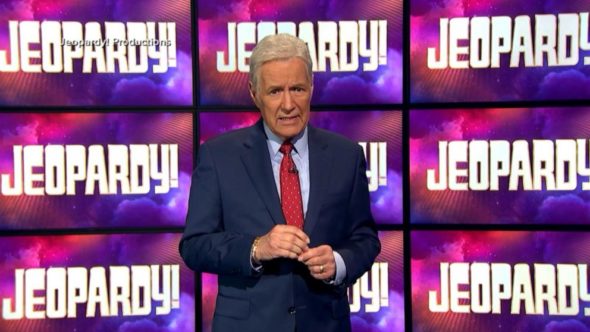 The Jeopardy! TV show ran out of new episodes in June, due to the COVID-19 production shutdown. In order to fill the game show’s timeslot, producers of the syndicated series plan to air four weeks of past episodes, including host Alex Trebek’s first episode — “mustache and all”. Trebek has recorded some new show openings for the episodes from his home.

In a video, Trebek talked about the retrospective episodes and his own health. He has been battling stage four pancreatic cancer since March 2019.

Here are portions of the Jeopardy! press release and the video:

“JEOPARDY! announced that it will open the vault for a four-week retrospective series starting July 20. For the first time, America’s Favorite Quiz Show™ will dig deep into its archives to highlight memorable contestants, exciting moments, and unique tournaments from the show’s 36-year history, including the series premiere, which aired September 10, 1984.

“What is incredible about JEOPARDY! is that it has historical importance while remaining culturally relevant today,” said JEOPARDY! Executive Producer Mike Richards. “I know our fans will love the nostalgia while still enjoying the gameplay. A lot has changed over the years – the set, the pace of the game…the mustache! – but the ability to play along is timeless.”

The JEOPARDY! producers combed through nearly 8,000 episodes and have chosen 20 of the most compelling shows in the series’ history, many of which have not been seen since their first airing. “

What do you think? Will you check out these classic Jeopardy! episodes when they air?

This is the best the producers can do until production resumes. It’s like a greatest hits or best of for viewers to enjoy! God bless Alex with his recovery. It’ll be hard to watch in future with a new host.