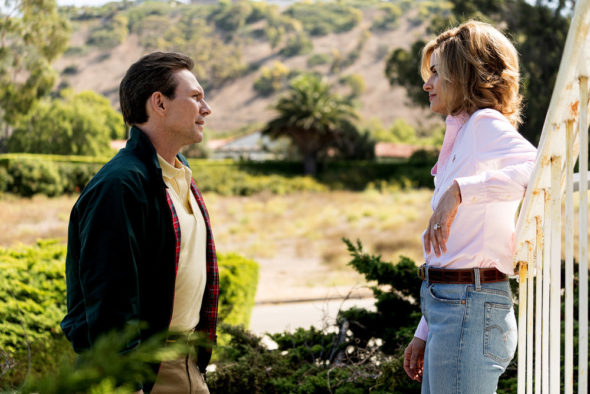 Do you already know how this story ends? Has the Dirty John TV show been cancelled or renewed for a third season on USA Network? The television vulture is watching all the latest cancellation and renewal news, so this page is the place to track the status of Dirty John, season three. Bookmark it, or subscribe for the latest updates. Remember, the television vulture is watching your shows. Are you?

Airing on the USA Network cable channel, the second season of Dirty John stars Amanda Peet, Christian Slater, and Rachel Keller with Missi Pyle, Emily Bergl, Holley Fain, Lena Georgas, Tiera Skovbye, and Chris Mason. Season two follows a shocking story of love, betrayal, and death that’s based on the lives of Betty and Dan Broderick. Betty (Peet) was the perfect Southern California blonde wife and mother. Married to her handsome college boyfriend, Dan (Slater), Betty charms everyone she meets. She sacrifices and suffers for years while supporting Dan through both medical and law school. He ultimately becomes a superstar in the San Diego legal community and Betty can finally enjoy the fruits of their labors. But then, Dan hires Linda (Keller), a bright, beautiful young woman. With Linda, he can happily forget the struggles of his past but, what about Betty?

The second season of Dirty John averaged a 0.17 rating in the 18-49 demographic and 775,000 viewers. Compared to season one (which aired on Bravo), that’s down by 55% in the demo and down by 42% in viewership. Find out how Dirty John stacks up against other USA Network TV shows.

Will USA Network cancel or renew Dirty John for season three? This show started on Bravo and moved over to USA for season two. The channel doesn’t have many remaining original scripted series and Dirty John is doing pretty well in the ratings so, my gut tells me that it will be renewed. I’ll update this page with breaking developments. Subscribe for free alerts on Dirty John cancellation or renewal news.

What do you think? Do you hope the Dirty John TV show will be renewed for a third season? How would you feel if USA Network cancelled this TV series, instead?