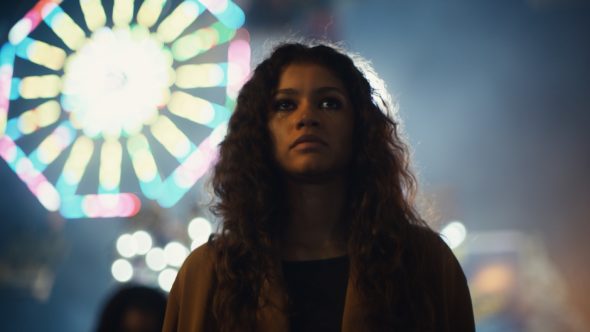 TV show description:
From creator Sam Levinson, and based on the Israeli series of the same name from Ron Leshem, the Euphoria TV show is dark teen drama. The series centers on a group of high school students trying to find their way through life, but the path is tricky — littered as it is with sex, drugs, trauma, and issues of identity, as well as love, friendship, and social media.

As it follows Rue Bennett (Zendaya), who is just 17, Euphoria examines how drug and alcohol-laden social gathering, and all the anxieties of modern living, complicate everything. When Rue meets trans girl Jules Vaughn (Schafer), who just moved to town after her parents split, it changes everything.

The other classmates in Rue’s life include Nate Jacobs (Elordi), an athlete with some anger management issues, and a boatload of insecurity, as well as his girlfriend, Maddy Perez (Demie). Meanwhile, Rue’s childhood friend Lexi Howard (Apatow) remains calm and sensible, even though her older sister Cassie Howard (Sweeney) can’t escape her past.

Rounding out this cast of characters are football star Chris McKay (Smith) who is having a hard time making the transition from high school to college; Kat Hernandez (Ferreira), who is trying to figure out who she is and what she wants to do with that; Fezco (Cloud), Rue’s drug-dealing friend; Gia (Reid), Rue’s sister; Leslie (King) Rue’s mother; and Cal (Dane), Nate’s dad, who is keeping his own secrets.


What do you think? Do you like Euphoria TV series? Should this HBO TV show be cancelled or renewed for another season?