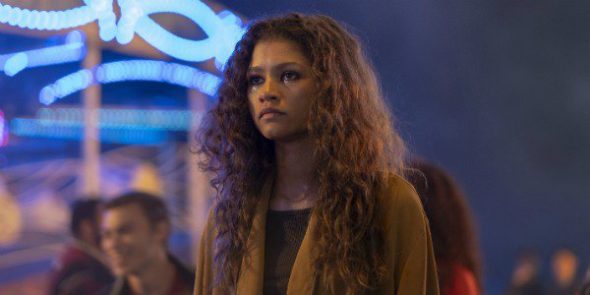 The drama series centers on a group of high school students trying to find their way through life, but the path is tricky — littered as it is with sex, drugs, trauma, and issues of identity, as well as love, friendship, and social media. The cast includes Zendaya, Hunter Schafer, Jacob Elordi, Alexa Demie, Algee Smith, Sydney Sweeney, and Maude Apatow.

Since its premiere in June, Euphoria has quickly become one of HBO‘s highest-rated new TV shows. So far, season one is averaging a .19 rating in the 18-49 and 563,000 viewers.

You can read more about the season two renewal below:

“Euphoria creator Sam Levinson has built an incredible world with an extraordinary cast led by the supremely talented Zendaya. We are so grateful that he chose HBO as the home for this groundbreaking series,” said Orsi. “We look forward to following these complex characters as their journeys continue through the challenging world they inhabit.”

EUPHORIA ranks as HBO’s youngest skewing drama series on the network’s digital platforms. In addition to delivering a series high for its Sunday night 10 p.m. premiere telecast, EUPHORIA continues to grow every week on HBO’s digital platforms. The series premiere night has already delivered over 5.5 million viewers across HBO’s platforms.

Kicking off its eight-episode first season June 16 on HBO and currently debuting new episodes on Sunday nights, EUPHORIA stars Zendaya (“Spider-Man: Homecoming”) who heads the ensemble cast of the show, which follows a group of high school students as they navigate a minefield of drugs, sex, identity, trauma, social media, love and friendship. The series is created and written by Sam Levinson (HBO’s “The Wizard of Lies”), who also directs five episodes of the first season.

EUPHORIA puts a fresh spin on the coming-of-age narrative, exploring the teenage landscape of substance-enhanced parties and anxiety-ridden day-to-day life with empathy and candor. The series follows 17-year-old Rue Bennett (Zendaya), a drug addict fresh from rehab, who’s struggling to make sense of her future. Her life changes dramatically when she meets Jules Vaughn (Hunter Schafer), a girl who recently moved to town following her parents’ divorce, and like Rue is searching for where she belongs.

Hollywood Reporter hails EUPHORIA as “boundary-pushing, real and exceptionally realized,” while Variety praises the series as having an “undeniable pull that makes it too intriguing to ignore.” TV Guide calls it “lusciously shot,” and getting “more and more jaw-dropping and gorgeous as it goes on.” Indiewire notes “Zendaya is exceptional at every turn,” and Rolling Stone praises the direction as “visually striking throughout, full of moments lit to look both menacing and intoxicating.”

What do you think? Are you watching Euphoria? Will you watch season two?

I LOVE his show. We are in our sixties and though there could not be wilder kids than us in the 1970s. Lol. Well done show. I’m very interested in what happens to these kids as they get older.

Brilliant! The writing , acting and filming is Brilliant! I can’t get enough of this series and have fallen in love with these characters! Absolutely loved every episode!

I think the show gives real insight into teenage lives. I think the show is brilliant. No more hiding in society and pretending everything is OK. Its not. These are real life situations and seeing it on tv does not make it look fun. It makes you feel less alone.