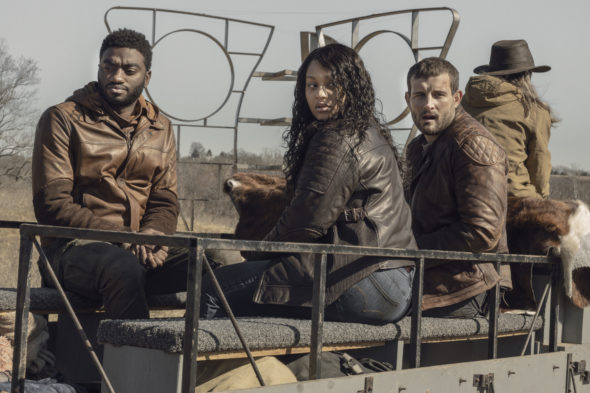 Where will these friends end up? Has The Walking Dead: World Beyond TV show been cancelled? Renewed for a third season on AMC? The television vulture is watching all the latest cancellation and renewal news, so this page is the place to track the status of The Walking Dead: World Beyond, season three. Bookmark it, or subscribe for the latest updates. Remember, the television vulture is watching your shows. Are you?

Airing on the AMC cable channel, The Walking Dead: World Beyond is set in the universe of The Walking Dead and follows the first generation raised in a surviving civilization of the post-apocalyptic world. The show stars Aliyah Royale, Alexa Mansour, Nicolas Cantu, Hal Cumpston, Nico Tortorella, Annet Mahendru, Julia Ormond, Joe Holt, Jelani Alladin, Natalie Gold, Ted Sutherland, and Pollyanna McIntosh. The story began with Iris (Royale), Hope (Mansour), Elton (Cantu), and Silas (Cumpston) — four friends who journeyed across the country on a mission that transformed everything they knew about themselves and the world. As they face off against the mysterious Civic Republic Military and fight for control of their own destiny, goals will shift, bonds will form and crumble, and innocence will be both lost and found.

The second season of The Walking Dead: World Beyond averaged a 0.12 rating in the 18-49 demographic and 584,000 viewers in the live+same day ratings (includes all DVR playback through 3:00 AM). Compared to season one, that’s down by 40% in the demo and down by 34% in viewership in the live+same day ratings (including DVR playback through 3:00 AM). While these numbers don’t include further delayed or streaming viewing, they are a very good indicator of how a show is performing, especially when compared to others on the same channel. Though other economic factors are involved, the higher-rated shows usually get renewed and the lower-rated ones get cancelled. Find out how The Walking Dead: World Beyond stacks up against other AMC TV shows.

What do you think? Do you think that The Walking Dead: World Beyond TV show should have been renewed for a third season? Are you sorry that AMC is ending this TV series, instead?

The show should continue. Unless, you’re making something in The Walking Dead!!

The problem with a lot of these shows not being renewed is that majority of people who watch shows including this one watch them on non live streaming channels and on the web. Also younger people don’t give ratings for shows which doesn’t mean people do not watch the show. It sucks while ratings make look grim I guarantee there are more watching and waiting for new episodes than the rating say. Tv is not what it use to be. Everything is streamed. Easily replay-able, easily recorded. Long gone are the days of your only chance to watch a show… Read more »

Last edited 6 months ago by The truth
1
0
Reply

Jim
Reply to  The truth

Totally agree. I’m sure I was known about.

Nice to see it go no need to waste good air time on this bad tv show so PLEASE put on a show worth watching ????

So the TWD:WB time slot was the only one you had available to watch anything at all, ever? Doubtful. You failed to make a valid point, but succeeded in showing your emotional age so congratulations for that I suppose – at least your effort here wasn’t totally fruitless.