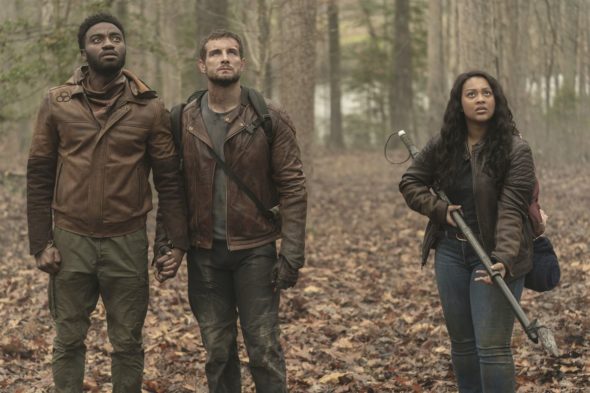 The second season of The Walking Dead: World Beyond is coming this fall and it’s also the end for the AMC limited series. A horror drama, this show is set in the universe of The Walking Dead TV series and AMC ordered two seasons of the series out of the gate.

The first season of The Walking Dead: World Beyond follows the first generation raised in a surviving civilization of the post-apocalyptic world. The season stars Aliyah Royale, Alexa Mansour, Annet Mahendru, Nicolas Cantu, Hal Cumpston, Nico Tortorella, and Julia Ormond. The story begins following two sisters and two friends as leave a place of safety and comfort to brave known and unknown dangers and begin an important cross-country quest. Pursued by those who wish to protect them and those who wish to harm them, it’s a tale of growing up and transformation. The story unfurls across dangerous terrain, challenging everything they know about the world, themselves, and each other. Some will become heroes while others will become villains. In the end, all of them will be changed forever. Grown-up and cemented in their identities, both good and bad.

While the cable channel has not specifically said that there won’t be a third season, the season description does note that season two “concludes the epic story of Iris (Royale), Hope (Mansour), Elton (Cantu), and Silas (Cumpston). four friends who journeyed across the country on a mission that transformed everything they knew about themselves and the world. As they face off against the mysterious Civic Republic Military and fight for control of their own destiny, goals will shift, bonds will form and crumble, and innocence will be both lost and found.”

The Walking Dead: World Beyond returns October 3rd at 10 PM ET/9c on AMC. New episodes will premiere early on AMC+, followed by a new episode of Talking Dead at 11 PM ET/10c.

Check out our status sheets to track new TV series pickups, renewals, and cancellations. You can find lists of cancelled shows here.
What do you think? Do you like The Walking Dead: World Beyond TV show? Does two seasons seem like a good place to end this AMC show?

I watched it, but only because I’m a diehard Walking Dead fan. The other two shows are great and I was hoping the same for this show so I wanted to give it a chance. I even watched the whole show twice, just to make sure I wasn’t missing something. Maybe they’ll pick it up in Season 2? More handsome males (they do have to one really cute guy from Younger) would have made a big difference.

Disaster of a show, couldn’t finish the 1st season.