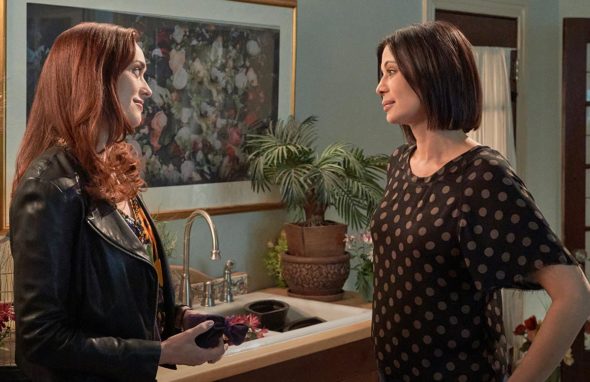 What new mystery will be unraveled in the seventh season of the Good Witch TV show on Hallmark Channel? As we all know, the Nielsen ratings typically play a big role in determining whether a TV show like Good Witch is cancelled or renewed for season eight. Unfortunately, most of us do not live in Nielsen households. Because many viewers feel frustration when their viewing habits and opinions aren’t considered, we invite you to rate all of the seventh season episodes of Good Witch here.  *Status Update Below.

A Hallmark Channel fantasy comedy-drama series, the Good Witch TV show stars Catherine Bell, James Denton, Sarah Power, Catherine Disher, Kylee Evans, Katherine Barrell, Marc Bendavid, and Scott Cavalheiro. Set in the town of Middleton, the show follows Cassandra “Cassie” Nightingale (Bell). She’s the owner of a shop called Bell, Book & Candle and is recently married to Dr. Sam Radford (Denton). Like her daughter Grace, Cassie has the gift of enchanted insight and magical intuition. The velvet pouches of soil discovered by Cassie, Abigail (Power), and Joy (Barrell) at the end of season six mark the start of a new Merriwick mystery for the cousins to unravel. This leads them to reflect on their pasts and how certain life events have impacted who they are now. Alongside the usual Middleton fun, season seven promises new relationships, personal challenges, and romance.

What do you think? Which season seven episodes of the Good Witch TV series do you rate as wonderful, terrible, or somewhere between? Do you think that Good Witch should be cancelled or renewed for an eighth season on Hallmark Channel? Don’t forget to vote, and share your thoughts, below.

*7/10/21 update: Good Witch has been cancelled by Hallmark Channel.

please, renew the rest of the seasons. this show has good Laughs, morals. it helps people through rough times. that’s exactly, what we need in this world right now. it shows people how to treat one another, love and kindness.

We love watching Good Witch. There are a couple of things I wish they would have never introduced into the show but over all its a good show. All the good shows that does not have voilence or vulgarity in it gets cancelled. Hope another channel will bring back the show if Hallmark doesn’t.

We love watching the “Good Witch Series & the Good Witch Movies before Halloween”. Hope they renew the Series & Movies again.

I love the show it makes me laugh and smile through out each episode. Hallmark has to find a way to make season 8 come alive.

Do not cancel the show if I can’t watch the night it’s on we tape it so the hole family can watch it .There is to much violence in our world now .We need more shows like this to show us happiness.

I LOVE ❤️ this show it’s about family trying to share the right attitude about other people not always thinking only your self . Is funny makes you laugh and smile with a dash of magic .

Please do not cancel Good Witch! I love the show and all it’s actors! It is inspiring and uplifting in this chaotic world we live in today.

Episode 7 seemed more like the past seasons. Hope the show is getting back to its original format. I really like the series and hope it’s picked up for season 8.