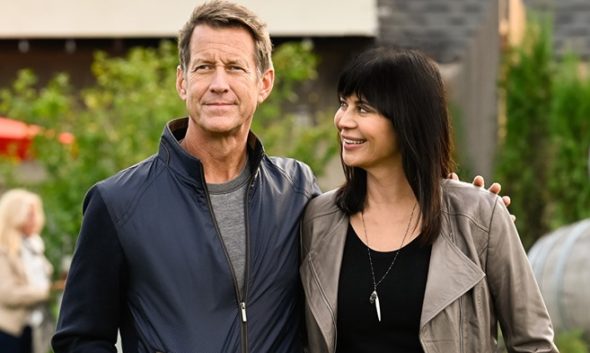 After five seasons, Bailee Madison has left the Good Witch series and Cassie has seen her daughter off to college. Since the mother-daughter relationship has been an important part of the series, how will this affect the show moving forward? Will this change negatively affect the ratings? Will Good Witch be cancelled or renewed for season seven? Stay tuned. *Status Update Below.

For comparisons: Season five of Good Witch on Hallmark Channel averaged a 0.21 rating in the 18-49 demographic and 2.15 million viewers.

What do you think? Do you like the Good Witch TV series on Hallmark Channel? Should it be cancelled or renewed for a seventh season?

I don’t what the show to end. I love watching every Sunday.

I love good witch it is a good family show to watch hope it can get picked up can’t leave us hanging . I love all different story lines .

It’s fantastic to read all the amazing reviews, on behalf of myself the camera/steadicam op and the camera department thank you for your support, looking forward to a possible S7

One of the best family shows on TV. Please make a season 7.

I agree. Please keep Good Witch. It is a feel good show, I look forward too. Renew please

I have seen all the movies and tv episodes- I adore Catherine Bell. My favorites are with Jake and the original cast,but I’m glad Martha remained a main character – ❤️ Her- and she’s a grandma!! Please give us a season 7!!

Absolutely love Good Witch as do my sisters. Unfortunately can’t get Series 6 as yet on Net Flex in the U.K. Has anyone any idea when it will be showing?

I love good witch show even wish could be on it. The cast amazing. Need to give cassie a part time nursing job cause they house cant have customers all year long.

I just love this show. Do hope it come back. Since cassie started a new life as a married woman, and Sam is starting out as a new husband, give them a new future as parents of a new born, this time make it a wizard boy. I just wish for Cassie to have a bit more magic than in the past, love the magic surprises.