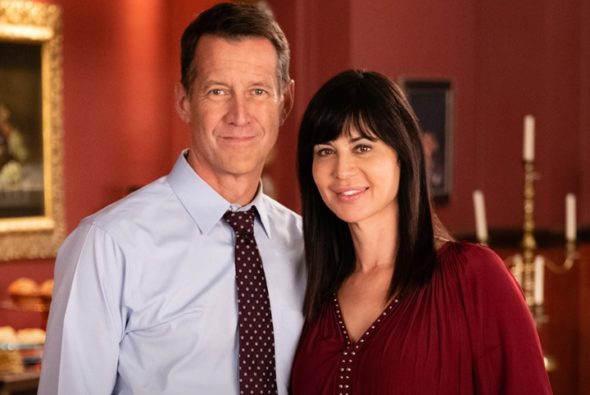 Is this Hallmark series still magical?  Has the Good Witch TV show been cancelled or renewed for a seventh season on Hallmark Channel? The television vulture is watching all the latest cancellation and renewal news, so this page is the place to track the status of Good Witch, season seven. Bookmark it, or subscribe for the latest updates. Remember, the television vulture is watching your shows. Are you?

The sixth season of Good Witch averaged a 0.17 rating in the 18-49 demographic and 1.87 million viewers. Compared to season five, that’s down by 19% and 13%, respectively. Find out how Good Witch stacks up against other Hallmark Channel TV shows.

Will Hallmark cancel or renew Good Witch for season seven? At this point, I think it will be renewed but we’ll have to see how the rest of the season’s episodes perform. I’ll keep an eye on the ratings and update this page with breaking developments. Subscribe for free alerts on Good Witch cancellation or renewal news.

7/16/20 update: Good Witch has been renewed for a seventh season on Hallmark.

What do you think? Are you glad that the Good Witch TV show has been renewed for a seventh season? How would you feel if Hallmark Channel had cancelled this TV series, instead?

Please do not cancel Good Witch as I agree with the words before, no swearing, clean good fun. What a delightful difference from the smut that we have to watch.. What,s wrong with decency?

Love this show. Look forward to it. Please don’t cancel it

So very happy Good Witch is not cancelled. It is one of the few shows in life that us not filked with curse words, sex or just plain filth. It is a wonderful wholesome show. We need many more of these type of shows.

Love watching this program and all the actress and actors

I love the good witch. I keep checking for ones I’ve missed.