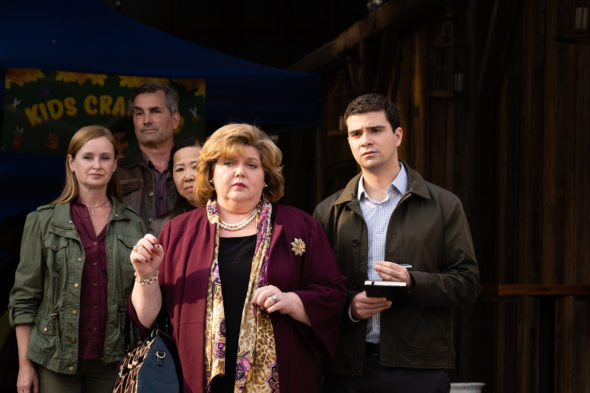 Is there magic in the air? Has the Good Witch TV show been cancelled or renewed for a sixth season on Hallmark Channel? The television vulture is watching all the latest cancellation and renewal news, so this page is the place to track the status of Good Witch, season six. Bookmark it, or subscribe for the latest updates. Remember, the television vulture is watching your shows. Are you?

The fifth season of Good Witch averaged a 0.21 rating in the 18-49 demographic and 2.15 million viewers. Compared to season four, that’s down by 8% in the demo and even in viewers. Learn how Good Witch stacks up against other Hallmark Channel TV shows.

Will Hallmark cancel or renew Good Witch for season six? The series is still doing well for the channel so I think it will be renewed, as long as the talent wants to continue making new episodes. I’ll keep an eye on the ratings and update this page with breaking developments. Subscribe for free alerts on Good Witch cancellation or renewal news.

What do you think? Should Hallmark Channel have renewed the Good Witch TV show for a sixth season? How many seasons do you expect this TV series to run?

Please include we Baby Boomers in your demographics. I’m a young active 71 year old and love this show ever since it first aired. Absolutely beautiful location and set decorating/ambiance. Idea! ….. Ask your audience if we might have story line ideas for episodes. Invite us to participate. WOW! What a concept!

I like ‘Good Witch‘ particularly for the relationships between characters. It gets annoying, however, when new characters eg Liam, seem set to fall for a regular, eg Stephanie but quickly disappear. For a town that’s supposed to be about romance a lot of gals got their hearts broken in season 5. I know it’s the Hallmark channel but I would have liked the topic of sex between Sam & Cassie to have had some life. Even a morning after bedroom sequence could have been tastefully done.

I have never been one to watch a tv series until the Good Witch, I thoroughly enjoyed the series and I hope that they continue with the series. I will be disappointed if the cancel the show. I love the magic, romance and friendship in it. Keep up the great work.

Good Witch is one of the few wholesome family shows left. Traditions of hard work, hope, patience, concern for people, offering advice without forcing our views (and still acceptance for those that may), without over “dramamization”. Sure, this is delivered as a fairy tale, but we still enjoy happily ever afters. All we need is a little magic and support. Keep this series going please.

I love the Good Witch! It should be renewed

I love the Good Witch hopefully it will return. Fantastic great characters and actors

Please renew The Good Witch!! I love their positive, happy attitudes. So refreshing!!

Absolutely!!! I can hardly wait!!! It’s one of the most wholesome family shows! Not many like it anymore. So happy it’s been renewed ❤️❤️