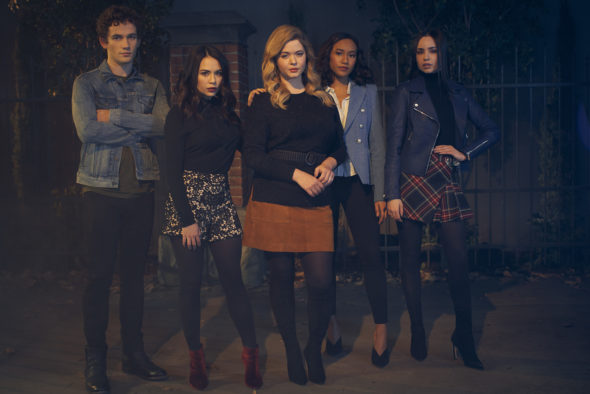 TV show description:
Based on the book series from Sara Shepard, the Pretty Little Liars: The Perfectionists TV show comes from creator I. Marlene King. The spinoff features the return of Pretty Little Liars original cast members Sasha Pieterse as Alison and Janel Parrish as Mona.

The series unfolds at Beacon Heights University and the surrounding town for which it was named. Everything is always perfect in Beacon Heights — at least it is supposed to be, but that very drive for perfection has deadly consequences.

The story centers on three college friends — Ava (Carson), Caitlin (Park), and Dylan (Brown) — known as the Perfectionists. A trendsetting blogger, Ava has designs on being known as a fashionista.

Caitlin is the daughter of two ideal mothers and intends to live up to the standard they’ve set. A type-A personality, she aspires to serve in the Senate.

Dylan, meanwhile, is a talented cellist. Now that he’s shaken off the dust of his judgmental small hometown, he intends to succeed at everything he tries. He is as devoted to his boyfriend as he is to music.

Then there is the matriarch of a powerful Beacon Heights family, Claire Hotchkiss (Rutherford), responsible for founding Hotchkiss Industries and the university. She too strives for perfection at any cost.

When the town’s high-pressured environment proves too much, someone loses it and kills someone. After the first ever murder in Beacon Heights, although they work together to solve the mystery, each Perfectionist hides behind “a secret, a lie, and an alibi.”

Series Finale:
Episode #10 — Enter the Professor
In the aftermath of a shocking event, Ali, Mona and the Perfectionists try to pick up the pieces of their lives. However, new information is uncovered which makes them question everything they think they know.
First aired: May 22, 2019.

What do you think? Do you like the Pretty Little Liars: The Perfectionists TV series? Should this Freeform TV show have been cancelled or renewed for a second season?

I believe they should bring this show back and possibly include more PLL characters.

I don’t understand why this show got canceled. I loved this show out was addictive .

I am really disappointed. I liked that show.

I love this show, and I hope and pray that it gets renewed.

Definitely deserves to be renewed.

I beg you to renew PLL: The Perfectionists for a second (and third, etc…) season! I have desperately missed PLL since it went off the air. I still watch it from time to time on Netflix. I thoroughly enjoyed watching Janell and Sasha continue their roles on the new show and hope that they can bring more characters from PLL to the cast. PLEASE don’t cancel!!!!

I think that the show deserves to be renewed for another season. The show honestly started quite slow but now after watching episode 9 and the new season finale, I can’t wait to keep watching! I’m really excited as to where they are going with this show. All the characters are great, each and everyone one of them adds something new to the table (a different perspective). I hope that this show does not get cancelled as that would be a waste of potential.

I have waited for this show to come out for a year and its finally here !!!!!!! Tomorrow is the season finale and I’m really excited . I love the new cast and the new story line . cant wait to see what season 2 brings us . so far the show has done great . Pretty Little Liars is what inspired me to start acting so big shout out to IMarlene King (creator)

It had promise to start I thought, but the storyline is a lot like PLL and alittle stale. Maybe if they could break out of the shadow of the former show? I don’t know. It just feels really corny and predictable at this point. Will watch the rest of the season until making my final decision on whether or not S2 would be worth it. I’m bored by it tho.