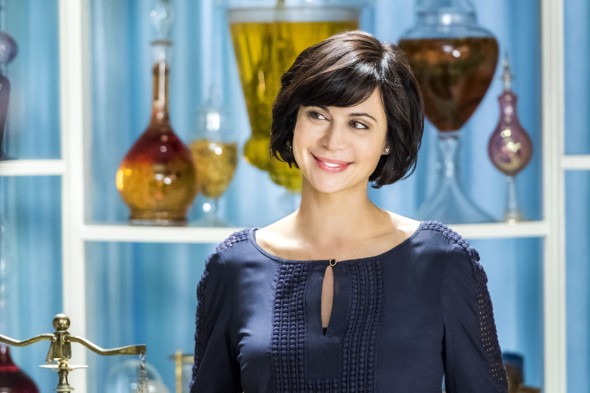 Good Witch is returning just in time for Halloween. Hallmark just announced the TV show’s sixth season will premiere in October with a two-hour special.

Cassie receives an unexpected visit from her college roommate Autumn Deveraux (Lolita Davidovich), who harbors resentment toward Cassie over a past event.  Cassie relies on her magical instincts to help Autumn through her unresolved feelings before she sabotages Middleton’s celebrations.  Martha plans a bonfire to honor the season and tries to ignore her husband’s failure to recognize the anniversary of their engagement on Halloween night.  Bad luck seems to thwart Sam’s attempts to plan a romantic Halloween for Cassie since it’s their first as a married couple, despite the arrival of a mysterious good luck charm.  Donovan makes a wager with Abigail over the Halloween-themed triathlon he is racing against Sam, with the winner earning the rights to decide the couple’s Halloween plans.  Stephanie and Adam rally the town to break a pumpkin carving record held by Blairsville.  Meanwhile, George and Nick search for Middleton’s mythical sea monster.  As the bonfire nears, Cassie works her magic to help Autumn overcome the past and take control of her future.”

What do you think? Are you a fan of Good Witch? Are you excited for the Halloween special?

Love Good Witch….DO NOT WANT CANCELLED! Was a fun, interesting story line. Love the Hallmark Movies and Mystries. Glad to see the Hanna Baking movie, hope are lot more. Love the stars. Wish the Gourmet couple would come back. That was also a good show. Like the ‘serial’ type program, aka movies. Also interesting to watch.

Love Good Witch! I have watch it since it started. I would hate to see it end. WHAT am I going to watch now?

Hallmark, get a move on, Need Good Witch or another Hallmark program. Hurry, times a wasting!!

Absolutely adore this program, cant get enough of it. Am waiting for season 6 to see what happens next after the emerald was revealed.

Love The Good Witch. Have been streaming it and am about halfway through the series. Love all the characters although Grace is a little too perfect for a teenager. I love Mayor Martha. She is just the character needed to add to the rest of the show.

Not too often does a TV series come along that inspires anyone that watches it and that life is worth living. “The Good Witch” Inspired me, it made me laugh, made me cry and left me wanting more. Once I started watching it I was hooked. I found myself watching an entire season at one sitting into wee hours of the morning. As season 5 ended I was left with nothing but joy and sadness. Joy that I had just watched the best series Netflix has ever produced in my estimation and sadness that it had ended leaving me wanting… Read more »

Wayne l. Baker. This show, all the series and movies has helped me deal with the loss of my wife nearly three years, mainly to the positive messages especially by the Cassie nightingale character. A wonderful, uplifting show, series and movies.

I have and do enjoy this show with my family and we re watch other GW movies and seasons too. And yes the seasons are to short.

I live in London so I’m way behind and have to play catch up. So I’ve had to watch all the series, one after the other on Netflix. I’ve watched the movies on YouTube. So when do I get to watch series 6?

I find the series a great show and is really family orientated.

Expected the same! Same question also ! When will it be rebroadcast or on demand ?

I have the Good Witch season set to record on my DVR and thought this would be too. My DVR failed to record it so won’t it be aired again….soon????

I too had it set to record and it didn’t , I hate missing it , does anyone know when will it air again the October 19th episode ?

I look forward to each feel good episode. I love all the actors. This show has both a comic and drama feel to it that when an episode is done it leaves you wanting more.

I strongly agree. Its a good movie dr radford sam was a hard core him and cassie didnt see eye to eye until cassie broke that heart of ice and the shield.

I look forward to each episode of the Good Witch. Catherine Bell is delightful ! A clean show without profanity and other unnecessary things is most welcome.