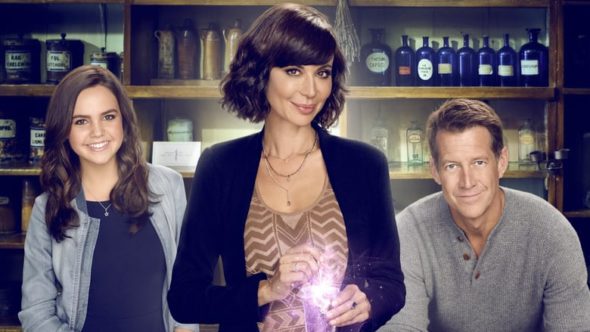 Do you still believe in magic and romance? Hallmark Channel is hoping that you do and has announced that season five of their Good Witch TV series is coming. The bewitching series returns on Sunday, May 5th, at 8 PM.

PASADENA, CA – “Good Witch” returns for more magical adventures in the bucolic burb of Middleton when season five premieres Sunday, May 5 (8 p.m. ET/PT), on Hallmark Channel. Based on the “The Good Witch” movie franchise that is the most successful in the network’s history, the series stars Catherine Bell (“Army Wives,” “JAG”), Bailee Madison (Just Go with It, “Trophy Wife”) and James Denton (“Desperate Housewives,” “Devious Maids”). Since the first movie 11 years ago, Cassie Nightingale has become a character that Hallmark Channel viewers have fallen in love with and look forward to welcoming into their homes. The announcement was made today as part of Crown Media Family Networks’ bi-annual Television Critics Association Winter Press Tour.

“The longevity of ‘Good Witch’ is a testament to the performances of Catherine Bell and the rest of the remarkable cast, who have brought to life characters our viewers look forward to spending time with,” said Michelle Vicary, Executive Vice President, Programming and Network Publicity, Crown Media Family Networks. “There are exciting changes in store this season as our characters’ lives evolve and we can’t wait for fans to go on the journey with them.”

Love is in the air when season five begins with Cassie (Bell) and Sam’s (Denton) much-anticipated wedding, bringing their two families together under one roof to face new challenges as a blended family. Grace (Madison) and Nick (Rhys Matthew Bond) are in their senior year of high school, which isn’t without some bumps in the road as they deal with the uncertainty of life after graduation. Abigail (Sarah Power), Middleton’s new mayor, plays political hardball with her charismatic Blairsville counterpart (Mark Bendavid). Their attraction is undeniable but an ancient curse threatens their budding romance. Stephanie (Kylee Evans) invests in a food truck to expand her business and, in the process, finds herself in a love triangle with the charming, new hospital chaplain (Scott Cavalheiro) and Cassie’s adventurous foster brother (Gianpaolo Venuta).

Meanwhile, with Martha (Catherine Disher) unseated as mayor due to a property line snafu, she’s drawn to a new career that’s right up her alley: hosting a local TV talk show. When the chance discovery of the town’s original charter reveals a centuries-old map, the hunt for a fabled, long-lost treasure ensues. If found, it could have momentous implications for the future of this not-so-quiet little town.

What do you think? Do you like the Good Witch TV show? Will you be watching when this Hallmark series returns?

I love the show do not cancel

Yes I will be watching. I love that show.

I have watched all 4 seasons of the Good Witch. I been hooked ever since and looking forward to season 6 keep up the great work writers of The Good Witch

the Good Witch film is a brilliant show and it must go on fore ever it has romance, it has Happy times Sad time it is a mix of everything. it has not come to NETFLEX yet so please hurry up and put it on to NETFLEX i would like to see it. good chose to keep the Good Witch. next ofter this is season 6.

Good Witch IS on Netflix. It’s where I watch it.

Love the Good Witch. Been waited for so long for the season 5 and then postponed till June. Can’t wait!!!

So glad to see that Witch return. Really missed Ms Bell.
She will also appear on NCIS-LA next Sunday 5/19.

I had the same problem! Good Witch never showed on the 5th.

Can’t wait to see the newest adventures of the Goodwitch family!!

Yes I will be watching happily I have loved The Good Witch since it began and I bought ever movie and series to date. I really want the Halloween shows also so please make them available to buy too. So excited for this weekend I took vacation time to be home and watch the all day marathon prior to the next series.

So looking forward to the return of the Good Witch!!! Love all the cast and great story lines. Nice to see a wholesome , fun show.

I love the witch. Keeps me in front of the tv.