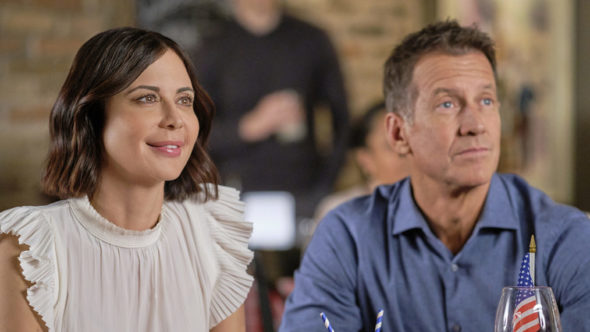 Cassie’s spell continues. Hallmark Channel has renewed the Good Witch TV show for a seventh season for the 2020-21 season.

Good Witch has been a hit for Hallmark Channel since it debuted in 2015. Season six, which finished airing on July 5th, averaged a 0.17 rating in the 18-49 demographic and 1.87 million viewers in Live+same day viewing. Compared to season five, that’s a 19% dip in the demo and a 13% drop in viewership.

Here are Hallmark’s announcements about the Good Witch renewal:

Due to the ongoing COVID-19 pandemic, there’s no word yet on when season seven will be filmed or aired.

What do you think? Are you a fan of Good Witch? Will you watch season seven?

Love Good Witch but why can’t I see it on Hallmark channel?

I love the show so much, I have completed all six seasons and will be watching them again. I am so excited to see series 7 coming very soon! I can’t wait. It is such a great feel good series.

Love the series. Very easy and entertaining. Great seeing a show that leaves you feeling good.

Love the series, I buy them all on YouTube to watch.
I keep watching reruns in anticipation for season 7

I love this series, I found it on Netflix and I ran through all the series in a month. I watched it every night after work. I can’t wait for the next season!

Love this series, have watched every episode and special as well as all the movies. I am looking forward to season 7 and many more. Please keep this series around for a long time.

I love the Good Witch will watch

I will definitely be watching season 7!