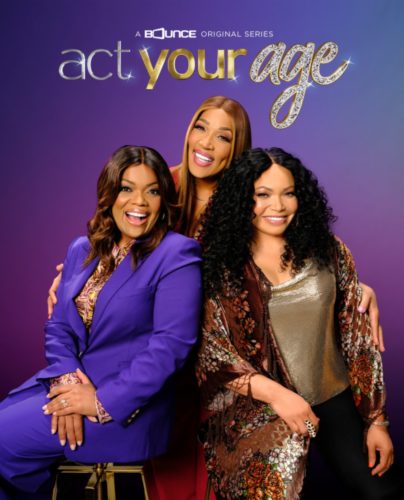 Act Your Age is coming to Bounce in Spring 2023. Starring Kym Whitley and Tisha Campbell, the new comedy series follows three women as they try to figure out how to adjust to life in their 50s. Yvette Nicole Brown appears as a special guest star, and Alyson Fouse serves as the showrunner. The cable channel has ordered 16 half-hour episodes.

Bounce TV revealed more about the new series in a press release.

The multiple-camera, half-hour, comedy tells the story of three vibrant, successful DMV area women in their 50’s who are each at a personal crossroads and who decide the best way forward in life is together. “Act Your Age” stars Kym Whitley (“Curb Your Enthusiasm,” “Next Friday,” “Young and Hungry”) and Tisha Campbell (“Uncoupled,” “My Wife and Kids,” “Dr. Ken”) with special guest star Yvette Nicole Brown (“Community,” “The Mayor,” “Big Shot”).

Whitley’s plays Bernadette, a successful, no-nonsense real estate developer. Campbell plays Keisha, the wild card of the group who is always up to something. And Brown plays Angela, the former First Lady of Norfolk, Virginia, who is looking to redefine her life after being widowed by her husband, revered career politician.

The 16-episode first season of “Act Your Age” has begun production in Los Angeles and will premiere on Bounce in the spring of 2023. Alyson Fouse (“The Neighborhood,” “Everybody Hates Chris,” “The Wanda Sykes Show”) created the series and serves as showrunner and executive producer.

“The opportunity to do “Act Your Age” with Kym, Tisha and Yvette on Bounce, a network that has made me feel so comfortable being my authentic self, means the world to me,” said Fouse. “We’ve built a world where the stories of Black women in the prime of their lives can be both funny and heartfelt; a world where individually they shine but they also show support for one another,” “Act Your Age” is a celebration of the Black women who have loved, raised, befriended and held me up through the years and honors and salutes the ones who have inspired me.”

The multi-generational sitcom also features Mariah Robinson (“The Wrong Valentine”) and Nathan Anderson (“All About the Washingtons,” “Richie Rich,”) as the 20-something children of Angela and Bernadette, respectively.

“Act Your Age” is the newest Bounce original series, joining “Johnson,” the critically acclaimed hit show focusing on four life-long best friends, and “Finding Happy,” starring B. Simone as a mid-30s woman determined to change her life for the better. Both of these shows come from Eric C. Rhone’s & Cedric The Entertainer’s production company A Bird & A Bear Entertainment.

Additional details and a premiere date for the upcoming series will be announced later.

What do you think? Are you planning to check out Act Your Age on Bounce when it launches next year?