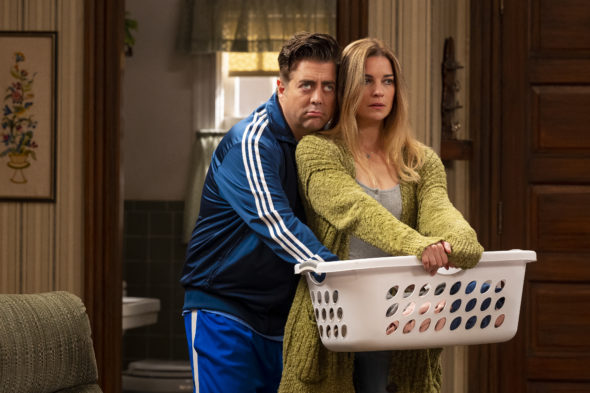 TV show description:
A dark comedy, the Kevin Can F**K Himself TV show was created by Valerie Armstrong.

Set in Worcester, Mass., the series tells the story of Allison McRoberts (Murphy), a woman we all grew up believing we knew — the prototypical “sitcom wife.” She’s beautiful and can take a joke, though, to be honest, she’s usually the butt of them. And, Allison’s married to Kevin (Petersen), a husky and “lovable” man-child who must’ve won some sort of marriage lottery.

But, what happens when we follow Allison out of her husband’s domain? When she finally wakes up to – and revolts against – the injustices in her life?

The series breaks television convention and blends multi-camera comedy with single-camera realism to make us ask: “who and what have we been laughing at all of these years?”

Other characters include: Patty O’Connor (Inboden), Allison’s tough and glass-half-empty neighbor who hides an intelligence and dissatisfaction that bonds her to Allison; Neil O’Connor (Bonifer), Kevin’s football-loving, beer-swilling, dim-bulb of a best friend; Pete McRoberts (Howe), Kevin’s father who’s got a regressive sense of humor; and Sam Park (Lee), a clean-cut, former Worcesterite who has a history with Allison.

What do you think? Do you like the Kevin Can F**k Himself TV show? Do you think it should be cancelled or renewed for another season?

This show was absolutely AWFUL! Terrible cast except for the wife. Nasty unfunny script…. and don’t get me started on that ridiculous laugh track. You can cancel this A.S.A.P. We only got thru about a half hour!