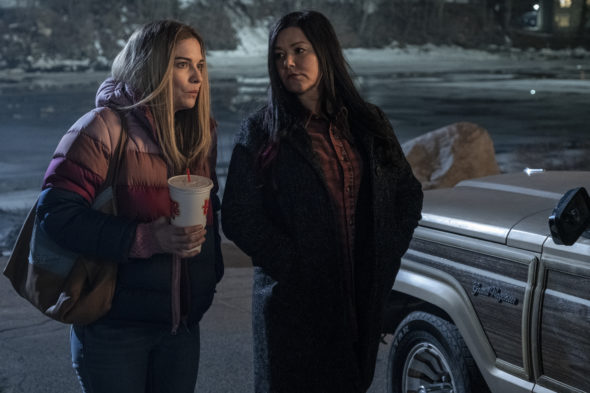 Allison is getting out, one way or the other. Has the Kevin Can F**k Himself TV show been cancelled or renewed for a third season on AMC? The television vulture is watching all the latest cancellation and renewal news, so this page is the place to track the status of Kevin Can F**k Himself, season three. Bookmark it, or subscribe for the latest updates. Remember, the television vulture is watching your shows. Are you?

Airing on the AMC cable channel, the Kevin Can F**K Himself TV show stars Annie Murphy, Eric Petersen, Mary Hollis Inboden, Alex Bonifer, Brian Howe, and Raymond Lee, with Meghan Leathers, Jamie Denbo, Candice Coke, Sean Clements, and Robin Lord Taylor in recurring roles. Season two guest stars include Peri Gilpin, Rachel Dratch, and Erinn Hayes. Set in Worcester, Massachusetts, the story probes the secret life of a type of woman we all grew up believing we knew: the prototypical sitcom wife. Allison McRoberts (Murphy) is married to self-centered and “lovable” cable guy Kevin (Petersen), but after a dark discovery, Allison teams up with neighbor Patty O’Connor (Inboden) to take drastic measures to escape her confines and take control of her life. She’s going to kill Kevin. In season two, after Neil (Bonifer) learned of the murderous plan, Allison and Patty scramble to deal with Neil, pushing Allison to find a better way out. Altering the original escape plan, Patty once again agrees to help Allison, but this time, on her own terms.

The second season of Kevin Can F**k Himself averages a 0.05 rating in the 18-49 demographic and 169,000 viewers in the live+same day ratings (includes all DVR playback through 3:00 AM). Compared to season one, that’s down by 36% in the demo and down by 44% in viewership. While these numbers don’t include further delayed or streaming viewing, they are a very good indicator of how a show is performing, especially when compared to others on the same channel. Though other economic factors are involved, the higher-rated shows usually get renewed and the lower-rated ones get cancelled. Find out how Kevin Can F**k Himself stacks up against other AMC TV shows.

What do you think? Do you wish that the Kevin Can F**k Himself TV show had been renewed for a third season on AMC? Is two seasons the right time to end the show?