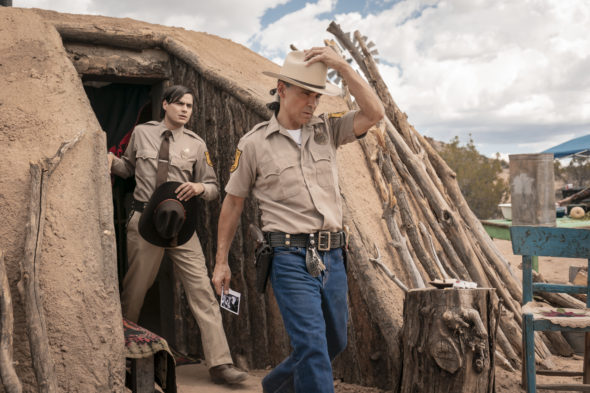 How will these crimes affect Leaphorn personally? Has the Dark Winds TV show been cancelled or renewed for a second season on AMC and AMC+? The television vulture is watching all the latest cancellation and renewal news, so this page is the place to track the status of Dark Winds, season two. Bookmark it, or subscribe for the latest updates. Remember, the television vulture is watching your shows. Are you?

Airing on the AMC cable channel and the AMC+ streaming service, the Dark Winds TV show stars Zahn McClarnon, Kiowa Gordon, Noah Emmerich, Jessica Matten, Rainn Wilson, and Deanna Allison. The story is set in 1971 on a remote outpost of the Navajo Nation near Monument Valley. Lieutenant Joe Leaphorn (McClarnon) of the Tribal Police is besieged by a series of seemingly unrelated crimes. The closer he digs to the truth, the more he exposes the wounds of his past. Leaphorn is joined on this journey by his new deputy, Jim Chee (Gordon). Chee also has old scores to settle from his youth on the reservation. Together, the two men battle the forces of evil, each other and their own personal demons on the path to salvation.

The first season of Dark Winds averages a 0.09 rating in the 18-49 demographic and 1.13 million viewers in the live+same day ratings (including DVR playback through 3:00 AM). While these numbers don’t include further delayed or streaming viewing, they are a very good indicator of how a show is performing, especially when compared to others on the same channel. There can be other economic factors involved in a show’s fate, but typically the higher-rated series are renewed and the lower-rated ones are cancelled. Find out how Dark Winds stacks up against other AMC TV shows.

Will AMC cancel or renew Dark Winds for season two? The series is doing relatively well for an AMC series (especially since episodes are released a week early via AMC+) so, I think there’s a good chance that it will be renewed. It doesn’t hurt that Robert Redford and George R.R. Martin are executive producers. I’ll update this page with breaking developments. Subscribe for free alerts on Dark Winds cancellation or renewal news.

What do you think? Are you glad that the Dark Winds TV show has been renewed for a second season? How would you feel if AMC and AMC+ cancelled this TV series, instead?

dark winds is a 10 star show, though hillerman has been dead quite some time, his books were excellent, amc, redford etal are doing a fantastic job, i can only hope it continues and more of leaphorn and chee stories continue, thank you for the wonderful entertainment including the social commentary on the navajo culture

I want to know what happens with the priest Jeremiah Bitsui’s part. Is he a bad guy or a good guy?