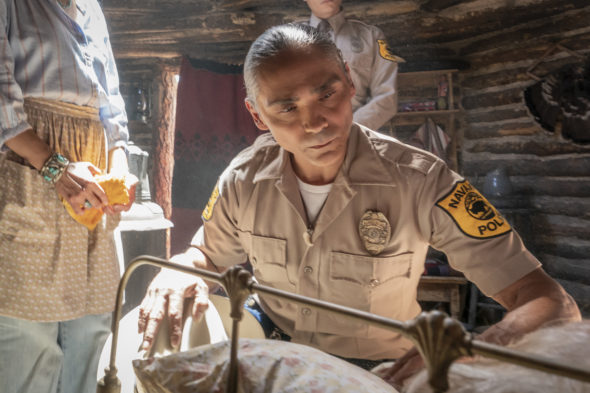 Leaphorn is staying on the case. AMC and AMC+ have already renewed the Dark Winds series for a second season. Just two of the first season’s six episodes have aired thus far.

A Western psychological-thriller series executive produced by Robert Redford and George R.R. Martin, the Dark Winds TV show stars Zahn McClarnon, Kiowa Gordon, Noah Emmerich, Jessica Matten, Rainn Wilson, and Deanna Allison. The story is set in 1971, on a remote outpost of the Navajo Nation near Monument Valley. Lieutenant Joe Leaphorn (McClarnon) of the Tribal Police is besieged by a series of seemingly unrelated crimes. The closer he digs to the truth, the more he exposes the wounds of his past. Leaphorn is joined on this journey by his new deputy, Jim Chee (Gordon). Chee also has old scores to settle from his youth on the reservation. Together, the two men battle the forces of evil, each other and their own personal demons on the path to salvation.

Airing on Sunday nights, the first season of Dark Winds averages a 0.11 rating in the 18-49 demographic and 1.18 million viewers in the live+same day ratings (including DVR playback through 3:00 AM). While these numbers don’t include further delayed or streaming viewing, they are a very good indicator of how a show is performing, especially when compared to others on the same channel. Dark Winds is one of the highest-rated AMC TV shows on the air right now.

NEW YORK, NY, June 21, 2022 – AMC Networks today announced that it has ordered a second season of the Western noir crime thriller Dark Winds. Produced by AMC Studios, the six-episode second season will arrive on AMC+ and AMC next year. The season one premiere on June 12 attracted an audience of 2.2 million viewers on AMC in Nielsen live+3 ratings, becoming the #5 cable drama premiere of the current broadcast TV season. Dark Winds is also the #1 new series launch in AMC+ history. The series has a 100-point score on Rotten Tomatoes.

Set in 1971 on a remote outpost of the Navajo Nation near Monument Valley, Dark Winds follows Lieutenant Joe Leaphorn of the Tribal Police as he is besieged by a series of seemingly unrelated crimes. The closer he digs to the truth, the more he exposes the wounds of his past. He is joined on this journey by his new deputy, Jim Chee. Chee, too, has old scores to settle from his youth on the reservation. Together, the two men battle the forces of evil, each other and their own personal demons on the path to salvation. The series is based on the iconic Leaphorn & Chee book series by Tony Hillerman.

“This once-in-a-lifetime creative team and cast have delivered something truly special with Dark Winds,” said Dan McDermott, president of entertainment and AMC Studios for AMC Networks. “We can’t wait to share the rest of this thrill ride of a first season with the fans and follow Joe Leaphorn and Jim Chee into a second season on AMC and AMC+ next year. Overwhelming gratitude to our entire production team and a special thanks to executive producers Robert Redford, George R.R. Martin, Chris Eyre and of course Zahn McClarnon, who also leads the cast and brings humanity, authority and the wisdom of richly lived experiences to everything he does.”

Dark Winds as a television series has been a project 35 years in the making. Robert Redford optioned Hillerman’s book collection more than three decades ago, and the series, whose first season focuses primarily on the book The Listening Woman, with elements of People of Darkness, found a home on AMC+ and AMC. The production worked closely with the Navajo Nation. With special permission, 70% of Dark Winds was filmed on tribal lands at Tesuque Pueblo in New Mexico, using their facility Camel Rock Studios. Another 30% of the series was filmed on tribal lands at Cochiti Pueblo, also in New Mexico.

About AMC Networks
AMC Networks (Nasdaq: AMCX) is a global entertainment company known for its popular and critically acclaimed content. Its brands include targeted streaming services AMC+, Acorn TV, Shudder, Sundance Now, ALLBLK, and the newest addition to its targeted streaming portfolio, the anime-focused HIDIVE streaming service, in addition to AMC, BBC AMERICA (operated through a joint venture with BBC Studios), IFC, SundanceTV, WE tv, IFC Films and RLJE Films. AMC Studios, the Company’s in-house studio, production and distribution operation, is behind some of the biggest titles and brands known to a global audience, including The Walking Dead, the Anne Rice catalog and the Agatha Christie library. The Company also operates AMC Networks International, its international programming business, and 25/7 Media, its production services business.

What do you think? Have you watched the Dark Winds TV series on AMC+ or AMC? Are you glad to hear that this show has been renewed for a second season?

EXCELlENT!!!! I remember Zahn from Longmire!!!!

TOP NOTCH SHOW!! Excellent story line, characters, scenery, actors – intelligent viewing – which means it would probably be cancelled except for the fact that Robert Redford is backing the show – he’s a big hitter so I think we’ll get to enjoy at least the 2 seasons.

holy sh-r it’s not cancelled, but some heavy hitters for exec producers. Wonder when they will announce that it is canceled.

Love Dark Winds. Glad it’s getting to get a second season.