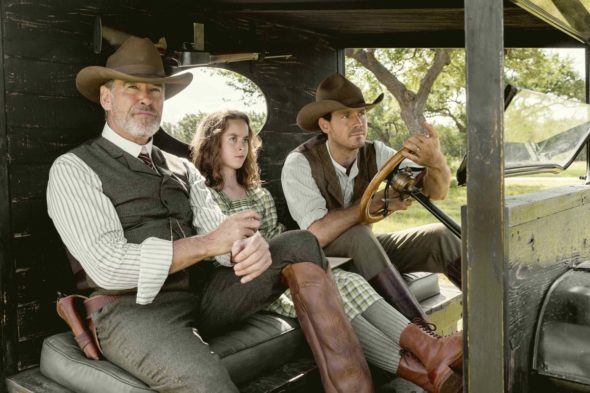 Fans of AMC’s The Son series have been waiting since the first season’s finale (which aired in June 2017) for the return of the Western drama. We’ve now learned that season two will begin airing on Saturday, April 27th, at 9 PM. There will be 10 episodes once again and, it turns out, those will also be the end of the show. There won’t be a third season.

Here’s the relevant portion of AMC’s press announcement about The Son:

The Son
Saturday, April 27 at 9:00 p.m. ET/8:00 p.m. CT
Based on Philipp Meyer’s New York Times best-selling and Pulitzer Prize finalist novel of the same name, season two of The Son concludes the journey of the iconic “First Son of Texas.” Eli McCullough (Pierce Brosnan) will stop at nothing to secure his legacy against the backdrop of the nascent oil industry of 1917. His tools are deceit, fraud and murder — weapons he wields with the effortless skill of the Comanche warrior he once was.

But the biggest challenge he faces will be quelling a civil war under his own roof, triggered by his idealistic son Pete (Henry Garrett). Eli knows the ultimate prize of American dynasty is nearly in his grasp, and time is running out. Meanwhile, in 1851, young Eli (Jacob Lofland) is now married and a respected warrior among the Comanches, but tragedy forces him into a leadership position as the vast Comanche empire crumbles around him. Broadening the scope, a 1988 timeline is introduced, bringing the McCullough saga into the more immediate past. Here, at age 85, Eli’s granddaughter Jeanne Anne McCullough (Lois Smith) is confronted with a long-buried family secret.

What do you think? Are you looking forward to watching the second season of The Son TV show on AMC? Are you sorry that there won’t be a third season?

It is sad they never least did one more season to wrap it up for us!

This was an awesome show.. to cut it so short & toss it, is a big disappointment. I hope AMC shakes their head & recognizes the lost potential.

I wish they hadn’t canceled it, I really really enjoyed the series! Please bring it back!

Yes, l feel the same way! An incredible story! Didn’t know or maybe I forgot about the trials the Mexicans in Texas lived through! Eli, Pete, Marcela( l think that’s her name) her finding out what her father was doing! Then, finding out about the fire of the romance between her and PETE, then finally watching how the granddaughter all grown up, handling the man born out of wedlock of the union between Pete and Marcela! Great story!

I’m angry, disappointed. This was the best series I’ve seen. Terrible way to end a series.

This was an awesome program! Seems like Everytime I find a good series, it’s always cancelled! Still glad I was able to watch the 2 seasons though!

It’s a shame that there won’t be a season three…We were so looking forward to the next season.

Would love to see a 3 season…this show is awesome!! So wonderfully filmed. Takes me out of my everyday life and back to the past..Beautiful..Pierce is great for that part!!

I think the son should go on for at least two more seasons, great show!

I really hope they bring back Season 3, Good Series

Great show would love to have seen an ending.
Season 3 should be made.

Agree! Crazy how garbage shows like Keeping up with Kardashians or whatever can run for 50 years tho….I have watched @ 10 minutes of one episode and wanted to snatch my own eyeballs out

you people dont get it , what a good show , instead you put on crap.