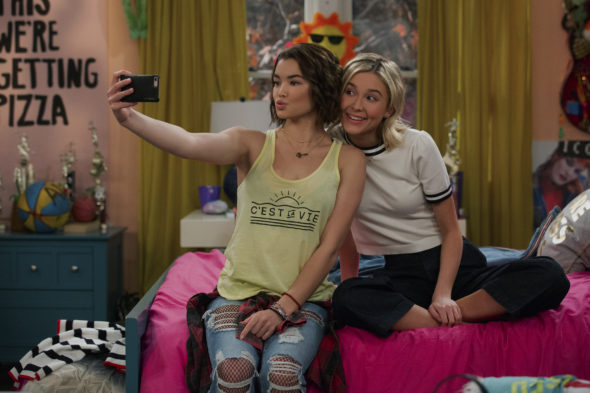 Are Alexa Mendoza and Katie Cooper still sticking together? Has the Alexa & Katie TV show been cancelled or renewed for a third season on Netflix? The television vulture is watching all the latest TV cancellation and renewal news, so this page is the place to track the status of Alexa & Katie, season three. Bookmark it, or subscribe for the latest updates. Remember, the television vulture is watching your shows. Are you?

Unless they decide to publicize viewership, it is difficult to predict whether Netflix will cancel or renew Alexa & Katie for season three. Netflix is beefing up its multi-camera comedy offerings for younger viewers, but in the end, it will depend on whether or not this show is giving them enough bang for their buck. My sense is that it will be renewed but it could go either way. For now, I’ll keep an eye on the trades and update this page with breaking developments. Subscribe for free Alexa & Katie cancellation or renewal alerts.

What do you think? Should the Alexa & Katie TV show have been renewed for a third season? How would you feel if Netflix had cancelled this TV series, instead?

I love you Alex and Katie so much i love how you guys are really close friends in the show and i hope you guys are like that in real life.

Yes it should be renewed it is awesome

Is that really you Alexa.

I think this show should be renewed. It is amazing! We need to see how the London trip went and the rest of high school years. Please make season 3 and don’t stop!

They HAVE to make a season 3!!! Super cute show! We have to know what happens with Katie’s London trip and the rest of high school! Please don’t cancel the show!

I think there needs to be a season 3!! You can’t leave us hanging on Katie’s London trip and what else happens with Alexa in her high school years! Do not cancel please!