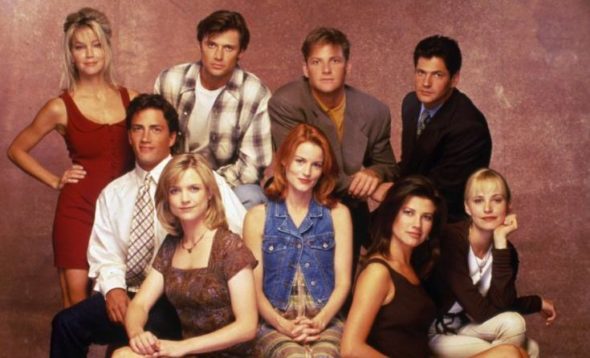 The gang from Melrose Place is together again. At least, some of the cast gathered together in New York recently for a segment on Good Morning America. Melrose Place aired on FOX for seven seasons between 1992 and 1992. There was even a short-lived revival of the prime time soap opera in 2009.

In 1992, the cast of Melrose Place included Thomas Calabro, Heather Locklear, Andrew Shue, Josie Bissett, Courtney Thorne-Smith, Grant Show, Doug Savant, Laura Leighton, Vanessa Williams and Daphne Zuniga. Others came and went on the series, which started as a spin-off from 90210, when Grant Show’s character had short romance with Kelly Taylor, played by Jennie Garth. Jake lived in the small apartment building, and viewers were introduced to the various tenants and their dramatic lives for 226 episodes.

The entire cast did not reunite for the Good Morning America segment, but Instagram posts by the actors reveal that Andrew Shue, Josie Bissett, Courtney Thorne-Smith, Doug Savant, Laura Leighton, and Daphne Zuniga enjoyed each other’s company during the trip. Shue is a married to Amy Robach, who is an anchor on the morning news show.

I’m joining the #melroseplace reunion…. Or I just pushed my way into the middle of a shoot for @strahansarakeke 😂

Check out Instagram posts from Josie Bissett, Laura Leighton, and Daphne Zuniga below.

The Good Morning America segment is rumored to air December 9.

What do you think? Were you a fan of Melrose Place? Will you tune in to find out where the cast is now?