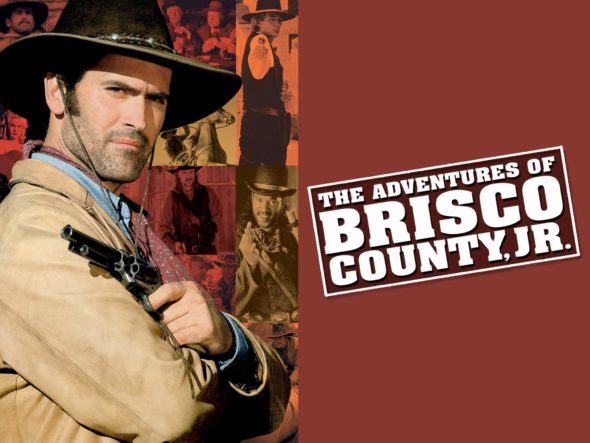 The Adventures of Brisco County, Jr. is having a reunion. The cast is reuniting tonight, July 31st at 8:00 PM ET, for a live reading of the pilot script.

Bruce Campbell, Julius Carry, and Christian Clemenson star in the 1990s sci-fi western comedy series, which aired a total of 27 episodes on FOX.

Here are more details about the reunion:

The Adventures of Brisco County, Jr. is the beloved, critically acclaimed sci-fi western series that ran for one glorious season in 1993 (back when TV seasons might have 27 episodes!). Brisco brought hope, humor, and heroics to a generation of fans and fictional townfolk. Now, when the world needs those things again, Brisco is back, running head-long and heart-hearty into a rerun of his very first episode!

This Friday at 5:00 PM PT, relive The Adventures of Brisco County Jr. We're doing a live reading of the pilot — with Bruce Campbell (@GroovyBruce) and many others! Tickets sold at https://t.co/7BsBt0uMWz All proceeds to charity.

What do you think? Were you a fan of The Adventures of Brisco County, Jr. series? Will you check out the reunion?

This is out on DVD. At first it was really expensive, but once the price dropped I bought 3 copies of it. One for myself and 2 as gifts.

Loved this show wish it would come back