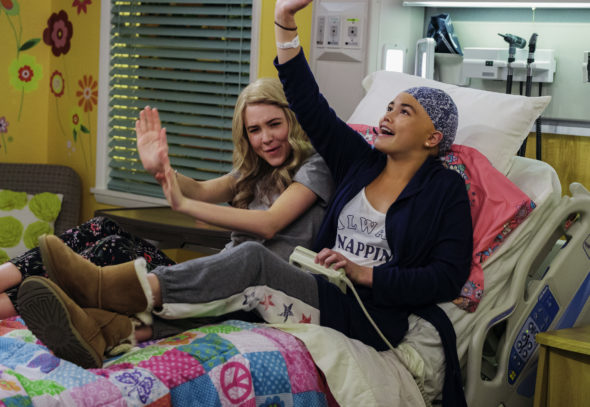 What is in store for Alexa Mendoza and Katie Cooper? Has the Alexa & Katie TV show been cancelled or renewed for a second season on Netflix? The television vulture is watching all the latest TV cancellation and renewal news, so this page is the place to track the status of Alexa & Katie, season two. Bookmark it, or subscribe for the latest updates. Remember, the television vulture is watching your shows. Are you?

A Netflix multi-camera comedy, Alexa & Katie stars Paris Berelc, Isabel May, Tiffani Thiessen, Eddie Shin, Jolie Jenkins, Emery Kelly, Finn Carr, Adam Ian Cohen, Iman Benson, and Merit Leighton. The sitcom centers on Alexa Mendoza (Berelc), who is undergoing treatment for cancer, just as she is about to enter her freshman year of high school. Outgoing and enthusiastic, despite her diagnosis and treatment, Alexa loves life out loud. With her unique yet steadfast best friend, Katie Cooper (May), at her side, Alexa refuses to let her spirit falter. The series explores the importance of female friendships in the modern age.

Unless they decide to publicize viewership, it is difficult to predict whether Netflix will cancel or renew Alexa & Katie for season two. Flying blind, I think it will score a second season. Netflix is starting to add multi-camera comedies and beef up its programming for the tween and younger teen set. For now, I’ll keep an eye on the trades and update this page with breaking developments. Subscribe for free Alexa & Katie cancellation or renewal alerts.
4/6/18 update: We learned that season two episodes are being filmed but Netflix hasn’t announced when they’ll be be releasing them. Details here.

What do you think? Are you glad that the Alexa & Katie TV show has been renewed for a second season? How would you feel if Netflix had cancelled this TV series, instead?

The show must have been picked-up for season 2 because the cast (and one of the directors) has been pretty clear that they are working on season 2. They started back about a week after the show premiered.

I am so happy that they renewed the show. I was hoping that they would do it because this show is one of the best shows that I have ever seen.

Wgat a great TV show. Always love seeing Tiffany in any tv dhow. This should continue. Looking forward to season 2

I barely started the series but i expect there to be a new season like most shows i predict it’ll be 7 to 8 seasons, if not canceled.