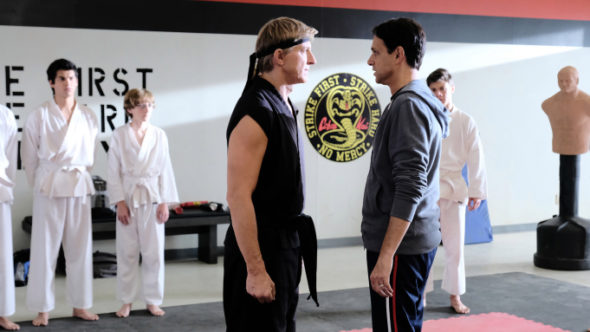 Netflix is committing to more of the Cobra Kai TV series. The streaming service has renewed the comedy-drama series for a fourth season and has revealed season three will launch on January 8, 2021.

A TV series continuation of the Karate Kid movie franchise, Cobra Kai is set some 30 years after the events of the first movie. A now successful Daniel LaRusso (Ralph Macchio) struggles to maintain balance in his life without the guidance of wise mentor Mr. Miyagi. He must also face his previous adversary, a down-and-out Johnny Lawrence (William Zabka), who seeks redemption by reopening the infamous Cobra Kai karate dojo.

The show debuted as a YouTube Red/Premium series back in 2018 and ran for two successful seasons. In June of this year, Netflix picked up exclusive rights for the upcoming third season, along with non-exclusive rights for the first two seasons from Sony TV. Word is that those two seasons have been performing very well for Netflix since they joined the service in late August.

Here’s Netflix’s fourth season announcement, as well as a preview of season three:

As Kreese says, "The story is just beginning." Season 3 premieres January 8, 2021 only on @Netflix.
And gear up because Season 4 is officially training to join the fight.
Cobra Kai Never Dies. pic.twitter.com/7znfWTHyuJ

That face you make when you just found out Season 4 was picked up!

What do you think? Have you been watching the Cobra Kai TV show? Will you tune in for season three? Are you glad to hear that it’s been renewed for a fourth season on Netflix?

I can’t wait to see the Cobra Kai new season on Netflix.