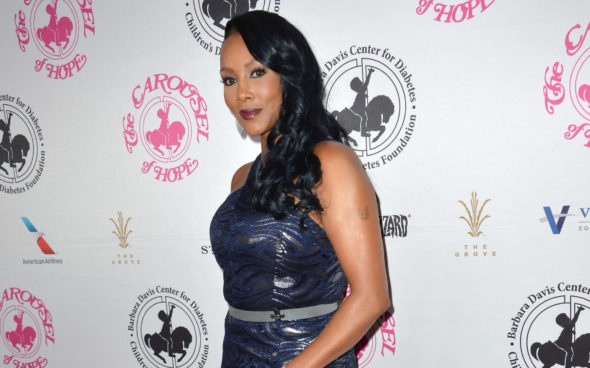 Stuck with You is adding to its cast for its second season. Vivica A. Fox is joining the romantic dramedy, which airs on UMC, a niche streaming service from AMC. Tammy Townsend and Timon Kyle Durrett also star in the series.

UMC revealed the addition of Fox and more in a press release.

“Following the announcement of its upcoming Thanksgiving premiere of the 6-part thriller, Terror Lake Drive, UMC – the popular streaming service for Black TV and film from AMC Networks – announced today a new addition to the cast of its popular romantic dramedy series, Stuck With You. The series which stars Tammy Townsend (Love Is_, K.C. Undercover) and Timon Kyle Durrett (Queen Sugar, Single Ladies) as Candace and Luvell – an unhappily married celebrity couple that struggles with being the face of #relationshipgoals while living separate lives behind closed doors – has added Vivica A. Fox to the new season. Fox, who most recently recurred as Candace on FOX’s Empire, will recur as Terry Parker, an entertainment industry mogul who along with her husband, Blu Parker (new recurring character Isaac Keys, Beyond the Lights), co-author a new hit relationship book that challenges the spotlight once held by Candace and Luvell.

Created by Patricia Cuffie-Jones, Stuck With You also adds actress Reneé Lawless (Tyler Perry’s The Haves and the Have Nots) to the cast. Lawless will play Charlotte Reed, a well-respected Hollywood vet and former manager to Luvell (Durrett) who’s determined to get him back to work and at the top of his acting game. Season 1 stars AJ Johnson (Baby Boy), Jessica Obilom (Trafficked), Terrence Green (Step Up: High Water), Tiffany Black (When Love Kills: The Falicia Blakely Story), Monti Washington (Tyler Perry’s “Bruh”), former Danity Kane member D. Woods, and R&B singer, Shanice all return for the new season with production currently underway.

“In Season 1 of Stuck With You, audiences followed along the dysfunctional rollercoaster ride that is ‘CandyLuv’ as they figured out how to move forward with their troubled marriage,” says Brett Dismuke, Chief Content Officer of UMC. “Now with the addition of ‘The Parkers’ to the storyline for Season 2, viewers are in for a whole new level of drama as these two celebrity couples battle it out for the #relationshipgoals title.”

Show creator Patricia Cuffie-Jones added “The new additions to this season will take the lives of our characters as we know them and flip them completely upside down. From first introductions to rekindling old flames, morals will be tested and temptations heightened as ‘The Parkers’ give our protagonists a run for their money. I’ve been a fan of Vivica’s forever and I’m honored to have her join our cast and bring in a new level of flavor that will have audiences in for quite the ride.”

What do you think? Are you a fan of Stuck with You on UMC? Do you plan to watch season two?

I love stuck with you. Can’t wait for the new season. People are sleeping on the formally network called UMC now allblk. The shows, plays and movies are all good.

I am a fan of Stuck with you and I am looking forward to the next season!

I absolutely love Stuck with You! The characters were well casted and brings real life situations to life. I can’t wait to end the cliff hangers with season 2.