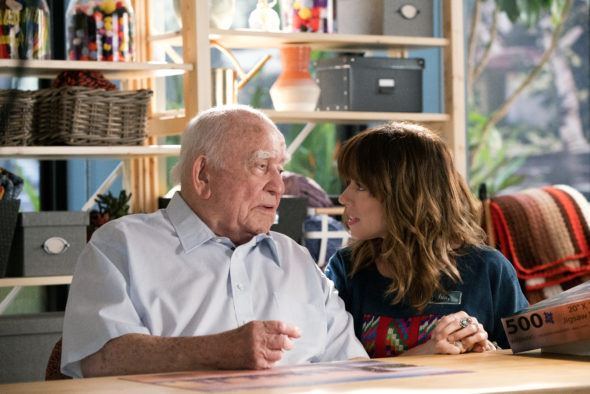 Are Jen and Judy still alive and kicking? Has the Dead to Me TV show been cancelled or renewed for a second season on Netflix? The television vulture is watching all the latest TV cancellation and renewal news, so this page is the place to track the status of Dead to Me, season two. Bookmark it, or subscribe for the latest updates. Remember, the television vulture is watching your shows. Are you?

A Netflix dark comedy, Dead to Me stars Christina Applegate, Linda Cardellini, Max Jenkins, Luke Roessler, James Marsden, Ed Asner, and Brandon Scott. The story centers on Jen (Applegate), a recently widowed woman who is bitter and desperate to solve the mystery behind hit-and-run murder of her husband. She meets free-spirit Judy (Cardellini) at a grief support group and, despite their differences, the two bond. Although Judy is the one person who doesn’t make Jen feel like she’s failing, she’s also keeping a shocking secret from Jen, which could change everything.

Unless they decide to publicize viewership, it is difficult to predict whether Netflix will cancel or renew Dead to Me for season two. Since Netflix isn’t ad-supported, it can take a chance on series it believes in and stories that need telling, but sooner or later it comes down to production costs, versus viewership numbers. Just ask fans of the One Day at a Time reboot. Generally speaking, Netflix TV shows which are going to be renewed are usually picked up within a month or so of the series or season premiere. For now, I’ll keep my ears open and an eye on the trades and press releases, and update this page with breaking developments. Subscribe for free Dead to Me cancellation or renewal alerts.

6/3/2019 Status Update: A month after the series premiere, Dead to Me has been renewed for season two on Netflix. Details here.

What do you think? Did you hope the Dead to Me TV show would be renewed for a second season? How would you feel if Netflix had cancelled this TV series, instead?