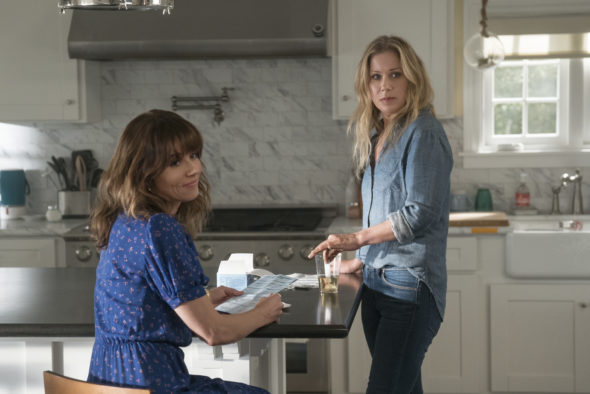 Some good news broke in the dead of night — the announcement that Netflix has renewed its Dead to Me TV show for a second season. The streaming service revealed the season two renewal during its Monday night “For Your Consideration” Emmy presentation. The show’s official Twitter account also touted the pickup on social media, as did stars Linda Cardellini and Christina Applegate, and creator Liz Feldman.

A Netflix dark comedy, Dead to Me also stars Max Jenkins, Luke Roessler, James Marsden, Ed Asner, and Brandon Scott. The story centers on Jen (Applegate), a recently widowed woman who is bitter and desperate to solve the mystery behind hit-and-run murder of her husband. She meets free-spirit Judy (Cardellini) at a grief support group and despite their differences, the two bond. Although Judy is the one person who doesn’t make Jen feel like she’s failing, she’s also keeping a shocking secret from Jen, which could change everything.

Dead to Me Renewed for Season Two on Netflix

Check out the Netflix press release for the Dead to Me pickup.

DYING TO KNOW WHAT HAPPENS TO JEN AND JUDY NEXT?!

NETFLIX’S “DEAD TO ME” RENEWED FOR A SECOND SEASON

For more on Dead to Me, visit our social channels:

My girl We got more time together. I love you pic.twitter.com/S7xdFj6mzk

Cannot wait to show you what we’ve got brewing… https://t.co/pwnZwBFQcL

What do you think? Have you streamed the first season of the Dead to Me TV series? Do you plan to check out season two on Netflix?