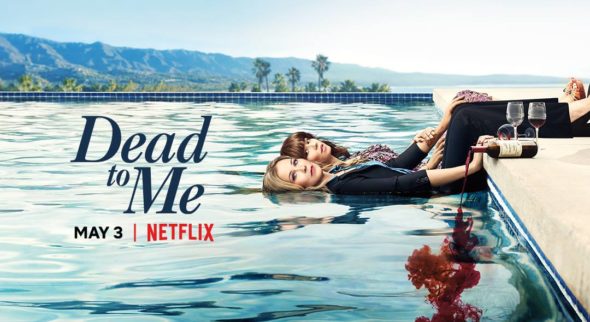 How lively is the first season of the Dead to Me TV show on Netflix? As we all know, the Nielsen ratings typically play a big role in determining whether a TV show like Dead to Me is cancelled or renewed for season two. Netflix and other streaming platforms, however, collect their own data. If you’ve been watching this TV series, we’d love to know how you feel about the Dead to Me season one episodes. We invite you to rate them for us here. **Status update below.

A Netflix dark comedy, Dead to Me stars Christina Applegate, Linda Cardellini, Max Jenkins, Luke Roessler, James Marsden, Ed Asner, and Brandon Scott. The story centers on Jen (Applegate), a recently widowed woman who is bitter and desperate to solve the mystery behind the hit-and-run murder of her husband. She meets free-spirit Judy (Cardellini) at a grief support group and, despite their differences, the two bond. Although Judy is the one person who doesn’t make Jen feel like she’s failing, she’s also keeping a shocking secret from Jen, which could change everything.

What do you think? Which season one episodes of the Dead to Me TV series do you rate as wonderful, terrible, or somewhere between? Should Netflix have cancelled or renewed Dead to Me for a second season? Don’t forget to vote, and share your thoughts, below.

**6/3/2019 Status Update: Dead to Me has been renewed for season two on Netflix. Details here.

Love this show and can’t wait for season 2! I hope this show is highly promoted so it gets better ratings!

I am surprised that this series is not more highly rated by critics. The casting is perfect. The acting is superb. It is written with wit and credible dialogue. It is indeed “darkly comic,” which is a difficult combination to pull off successfully. (I know; I know. “Dying is easy. Comedy is hard.” Combining them, though: awesome!) Although I am often reminded of “gal pals” Grace and Frankie, the friendship between Judy and Jen is convincingly complex and, as Judy might say, “layered.” This was not a show that I sought out–I did not think that it would appeal to… Read more »

Love the show!!! Need to hurry with Season 2

Love the Serie: Dead to Me. Can’t wait for Season 2. I Vote YES Make a 2nd season.

Dead To Me is one of the best series I’ve seen. Every episode is fantastic. Please renew this show. Brilliant story telling and the acting is superb . Loved every second.

Dead To Me is an awesome T.V. Series. The best in many years. Hurry up with Season 2 on Netflix. I can’t wait.