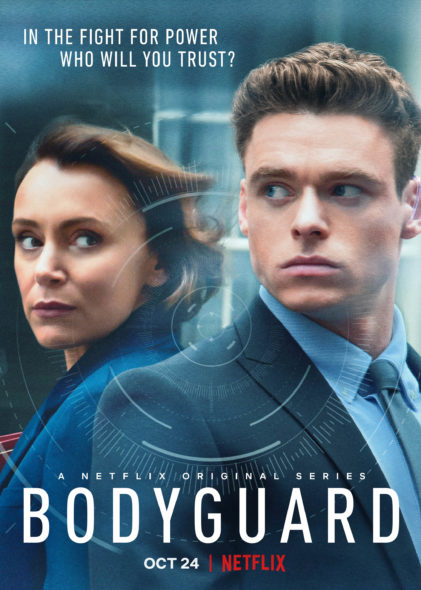 Do you feel safe in David Budd’s hands, during the first season of the Bodyguard TV show on Netflix? As we all know, the Nielsen ratings typically play a big role in determining whether TV shows are cancelled or renewed. Netflix and other streaming platforms, however, collect their own data. If you’ve been watching this TV series, we’d love to know how you feel about the Bodyguard season one episodes. We invite you to rate them for us here.

What do you think? Which season one episodes of the Bodyguard TV series do you rate as wonderful, terrible, or somewhere between? Should Netflix cancel or renew Bodyguard for a second season? Don’t forget to vote, and share your thoughts, below.

Bodyguard is a fantastic, tense and must-watch drama. The inclusion of real BBC news reporters (radio and TV) gave the series a whiff of ripped-from-the-headlines realism although that point may be lost to non-UK viewers. It was a huge success in Britain and, if the television viewership outside the UK and Ireland (where distribution rests with the BBC) has any sense, this should be a monster hit worldwide. I am very interested to see a second series of Bodyguard but I do have a concern. (Spoiler-ish alert.) Given that the plot development of series one results in one of the… Read more »

Great show. I only hope it can have a second season