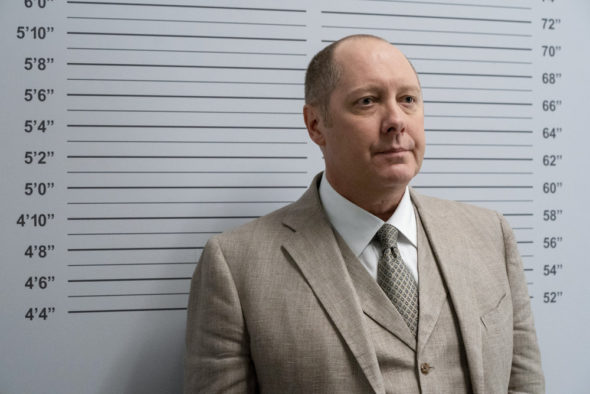 Will Liz ever learn the truth about Red? Is The Blacklist TV show cancelled or renewed for a seventh season on NBC? The television vulture is watching all the latest cancellation and renewal news, so this page is the place to track the status of The Blacklist, season seven. Bookmark it, or subscribe for the latest updates. Remember, the television vulture is watching your shows. Are you?

An NBC action thriller, The Blacklist stars James Spader, Megan Boone, Diego Klattenhoff, Amir Arison, Mozhan Marnò, Hisham Tawfiq, and Harry Lennix. The crime drama centers on one of the FBI’s most wanted fugitives, Raymond “Red” Reddington (Spader), who offers to help the authorities, if rookie agent Elizabeth Keen (Boone) partners with him. In season six, following revelations that Red is not who he claimed to be, Liz is determined to get to the truth, even while Red continues to build his empire and eliminate his rivals.

The sixth season of The Blacklist averaged a 0.57 rating in the 18-49 demographic and 4.00 million total viewers. Compared to season five, that is down by 38% and 29%, respectively. Find out how The Blacklist stacks up against the other NBC TV shows.

Will NBC cancel or renew The Blacklist for season seven? The numbers are way down, yet again, so I feel like this show will end this year or next. This show’s fate has gotten harder to call over the years, and the cancellation of the spin-off didn’t help matters. If the network had a replacement in place, it might be easier to bid the original adieu. For now, I’ll keep a hungry eye on the Nielsens and update this page with breaking developments. Subscribe for free updates on any cancellation and renewal news, regarding The Blacklist.


What do you think? Do you still enjoy The Blacklist TV series? Should this NBC TV show have been cancelled instead of renewed for season seven?

One of the best shows I ever watch. If it were my choice I would let it run until the actors went into retirement. I absolutely enjoyed the humor. The development of the characters made the audience connect with the actors. The actors sprinkled their magic & brought their characters to life. This show is a wonderful ride! Thank you, to all involved creating the show.

I love the show Blacklist! Please renew it!

My husband and I look forward to watching the blacklist every Friday night. We certainly hope NBC doesn’t cancel it, it’s one of the best programs on TV. If they must move it, move it to Saturday night, there’s absolutely NOTHING good on any TV station Saturday night. KEEP THE BLACKLIST, PLEASE…………….

Please do not ever cancel The Blacklist show.

I LOVE The Blacklist and I will be terribly depressed if it is canceled!! YES, we need a season 7 and beyond!!!