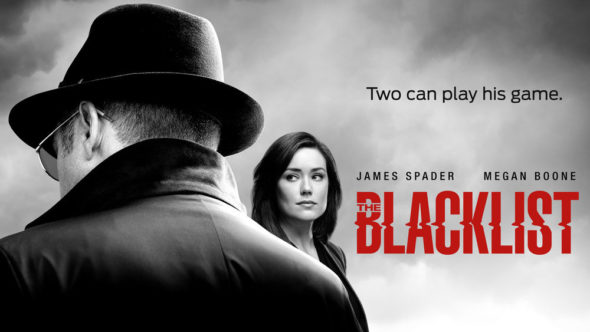 Last year, although The Blacklist TV show dropped a little in the Nielsen ratings 18-49 demo, it actually rose in terms of total audience size. Now that it’s back for a sixth season and the cancelled spin-off is a distant memory, can it regain some of the ground it has ceded over the years or, is this the beginning of the end for the Concierge of Crime? Will The Blacklist be cancelled or renewed for season seven? Stay tuned. *Status update below.

An NBC action thriller, The Blacklist stars James Spader, Megan Boone, Diego Klattenhoff, Amir Arison, Mozhan Marnò, Hisham Tawfiq, and Harry Lennix. The crime drama centers on one of the FBI’s most wanted fugitives, Raymond “Red” Reddington (Spader), who offers to help the authorities if rookie agent Elizabeth Keen (Boone) partners with him. In season six, following revelations that Red is not who he claimed to be, Liz is determined to get to the truth, even while Red continues to build his empire and eliminate his rivals.

For comparisons: The fifth season of The Blacklist averaged a 0.93 rating in the 18-49 demographic and 5.66 million viewers (live + same day ratings).

What do you think? Do you still like The Blacklist TV series? Should this NBC TV show be cancelled or renewed for a seventh season? How many more seasons should it run?

Yes really like blacklist my favorite series I hope it never ends.

This is the best TV series that I’ve ever seen. The writers of this show are the best. I usually can’t continue to watch a series because you can tell when they are running out of ideas, but not with the Blacklist. This show is addictive and is MUST SEE TV! to the writers and the Network for keeping this show alive. I also need to start a “Bring Dembe Back” Petition. How many signatures can I get?

It’s my favorite show I pray it never ends.

I agree with the previous folks who love this show. I simply wanted to voice my desire to see Mr. Kaplan return. She has to be out there plenty enraged. Dembe was Red’s conscience in some respects & I wonder how Red will do without the assistance & opinions. I will miss that dynamic-unless he returns??? Keep going strong in season 7.

By the way. BRING BACK MR. KAPLIN, tell her all is forgiven!! Just don’t do it again.

As previously stated, this is the best show since the original 24. Glad to here that it has been renewed for season 7. Hoping Dembe and Reddington get back together. The dynamics of their relationship was a rare thing in TV today. SOOOOOO tired of the reality shows, Blacklist is a breathe of fresh air.

I'm not telling you my name.Is that clear?

Hello to those who decide the fate of this show, I hope you have at least a basic IQ to understand that this show is EXCELLENT.It is smart written and smart played,a rare combination when you have hundreds of TV channels and nothing actually to see on any of them,then you can recognize an interesting and entertaining show and THE BLACKLIST is that interesting and entertaining show.I wish you can run 2 episodes together instead of 1.Fridays are PERFECT for this show,and cut the commercials-they are sooooo annoying. I want more stories and lot,lot of action in THE BLACKLIST,bring back… Read more »

The ratings are silly based on TV viewers!!!!…I only watch the internet commercial free…

Most intelligent show on the air. Hope it stays on so I won’t have “reality” shoved down my throat.

I love the Blacklist. Please renew the series and keep Raymond Reddington alive.

It is the most intriguing show to watch since 24.
Keep it going Raymond!!