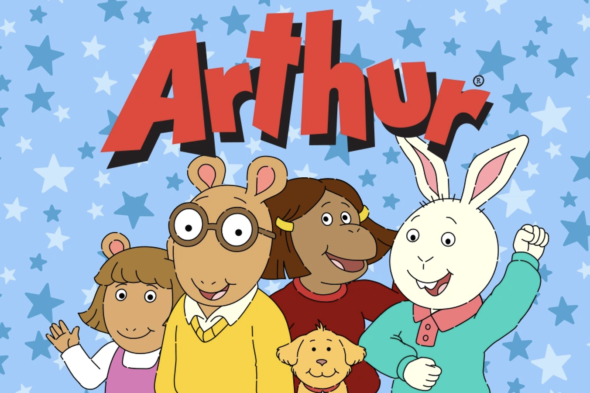 The sun will set on the Arthur TV series during the 2021-22 television season. It’s been revealed that PBS’ long-running educational show for kids has been cancelled after 25 years. The final episode is expected to air next year.

Based on the popular Arthur Adventure childrens’ book series by Marc Brown, the Arthur television show debuted on PBS in 1996. The story revolves around eight-year-old Arthur Read (an aardvark), his family, and friends at Lakewood Elementary School in Elwood City (which looks a lot like Boston). Some of the characters have been voiced by the same actors since the beginning of the show’s run. Others have been played by younger actors and have been replaced multiple times. For example, the titular character has been played by Michael Yarmush, Justin Bradley, Mark Rendall, Cameron Ansell, Dallas Jokic, Drew Adkins, William Healy, Jacob Ursomarzo, and Roman Lutterotti across the 25 years.

The show is the longest-running kids animated series in the history of American television and 249 episodes have aired thus far. Most seasons have had 10 episodes apiece while the most recent seasons have had just three or four new installments.

It seems that the show wrapped some time ago. Actor Bruce Dinsmore, who’s played schoolmate Binky and Arthur’s dad for the entire run, seemed to indicate that the show was ending back in November 2018.

24 years is a good run for a gig, & this is the face I made at the very last session. Binky though seems nonplussed, he’s always been tougher than me. And I was just starting to get the hang of the whole Dad thing… Thanks “Arthur” it’s been a great ride. “And I say Hey……!” pic.twitter.com/SHeWlTiuNf

Waugh noted, “Arthur is no longer in production. We had our wrap party two years ago… I think [PBS] made a mistake, and I think Arthur should come back, and I know I’m not alone in thinking they made a mistake. I don’t know if it was a ratings issue or if [the show] felt like it needed to be retired. To me, it felt evergreen, like it was never going to end. But, it did end. We finished the last episode of season 25 two years ago.”

An executive producer on the show, Carol Greenwald, has confirmed cancellation in a statement to IGN. “In the winter of 2022, the 25th and final season of Arthur will debut. Arthur will continue to be available on PBS KIDS for years to come,” Greenwald said. “Producer GBH and PBS KIDS are continuing to work together on additional Arthur content, sharing the lessons of Arthur and his friends in new ways.”

Here’s the iconic theme, performed by Ziggy Marley and the Melody Makers.

What do you think? Have you or your children enjoyed the Arthur TV series on PBS? Are you sorry to hear that there won’t be a 26th season or, is this a good time to end it?

It’s very sad that Arthur is ending this year. I used to support him since day one. I even read his stories and played some of his online games when I was younger. And now everything must come to an end. And I really wish it would continue for even more new episodes. Oh, well. He’ll always be in my memories and same goes for the creator Marc Brown.

This show was such a huge part of my childhood back in the 90s so I’m sad to see it go but am glad the reruns will continue to air on there. Every now and then on a very rare occasion, I’ll watch an episode if I’m in the mood for it and it just takes me back. I am glad to see that it’s lasted this long as Arthur is going to go down as a truly legendary animated series and I was blessed to had grown up in an era where PBS Kids was still popular. A lot… Read more »

I used to watch this all the time when I was a kid. Even though I’m an adult I’ll be sad to see it go.

I’m sad it’s going to end soon…. I feel the last couple seasons been better compared to my childhood version of the show

I am so sad to see it go. This was really fun to watch and I just cannot believe it is ending, anyways thank you for the memories.

I’ll miss this show, even though I’m an adult now.

This show was a huge part of my childhood, and despite having not seen it in a long time and being 29 now, this saddens me. I’ll definitely miss it. 🙁

Goodbye one of best 1990’s program grew up with you be missed our childhood memories never be same without Arthur. Rip get up Saturday morning watch it I love it.