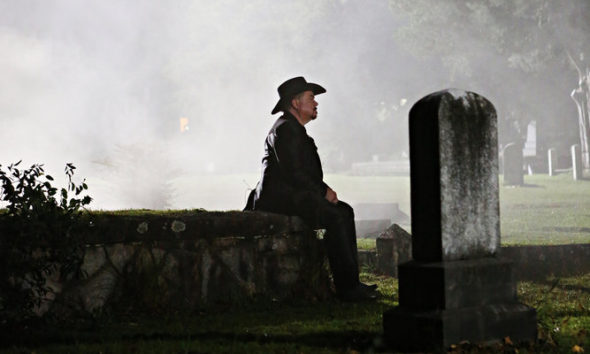 Syfy doesn’t restrict itself to science fiction programming. Some new fantasy dramas are making their debut in the 2017-18 television season. The first seasons of Ghost Wars and Superstition kicked off within a couple of weeks of each other. Is the supernatural still a safe bet for this cable channel? Will Superstition be cancelled or renewed for season two? Stay tuned.

A horror drama, Superstition stars Mario Van Peebles, W. Earl Brown, Demetria McKinney, Diamond Dallas Page, Robinne Lee, Brad James, Morgana Van Peebles, T.C. Carter, and Tatiana Lia Zappardino. The Syfy series centers on the Hastings family of La Rochelle, Georgia. They happen to own the only funeral home and cemetery in town. Because of unexplained deaths due to demonic activity, the family also offers “afterlife care.” In addition to their arsenal of esoteric weapons, the Hastings employ extraordinary strength, alchemy, and their expertise in ancient lore and the occult, to keep the “Infernal problem” at bay, in this “landing patch” of a town. **Status update below.

What do you think? Do you like the Superstition TV series? Should it be cancelled or renewed for a second season on Syfy?

**6/6/2018 Status Update: Superstition has been cancelled by Syfy. Details here.

Its time to renew Superstition.

Please Bring superstition back it was the best show that syfy had on thursdays please bring it back to tv.

I doubt they will get a second season

Keep this show on the air, please give us season 2

Yes I want season 2 superstition it was good to watch

I love superstition truly hope we get season two!

AWESOME Show!! One I Never miss!! I hope to see this show go on for many seasons!! PLEASE RENEW!!!

I didn’t know the show existed until I saw Mr. Van Peebles on a talk show promoting it. I watched all of Season 1 back to back on (On Demand) and really enjoyed the series. I hope there will be a Season 2.