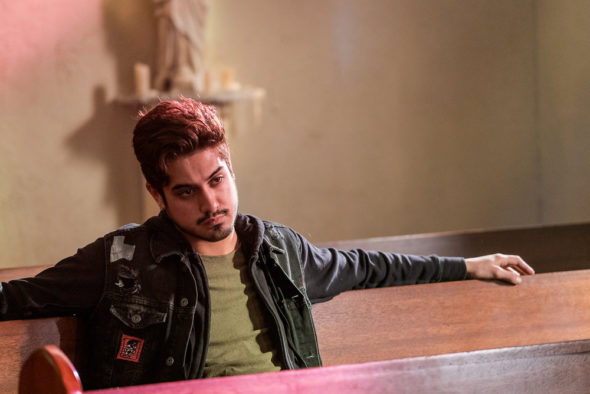 TV show description:
A horror series from creator Simon Barry, the Ghost Wars TV show unfolds in Port Moore. Lately, paranormal forces have overwhelmed this isolated Alaskan town. The drama centers on local loner Roman Mercer (Jogia), a troubled psychic whose ability to see the dead has been the bane of his existence.

Before the ghosts descended upon Port Moore, Reverend Dan’s (D’Onofrio) congregation was dwindling, which kicked off his crisis of faith. Now that ghosts have infested town, people are just flocking to church.

The local doctor, Marilyn (Lehman), finds herself the subject of gossip, thanks to the age difference between her and her wife. Still, the townies appreciate her professional ability, and she is well respected in that regard.

The residents of Port Moore are split in their opinion of Jimmy (Coates). This former fisherman is now running a smuggling operation. Still, to some he’s just a charismatic rascal, while to others, he is a charlatan, plain and simple.

Although she spent much of her life trying to escape her own hamlet, Landis (McClure) ended up with more of the same, when she landed in Port Moore. This research scientist can’t, however, discount the opportunities this place affords her, despite her aversion to small town living.

Finally, there is Doug (Meat Loaf Aday). A disturbed man, full of anger, Doug can’t outrun his terror-filled past. He tends to see Roman as an obvious fall guy upon whom he can cast blame.

Overall, the residents of Port Moore look upon Roman as an outcast. In order to rescue them from the mass haunting which could be their undoing, Roman must first conquer their narrow-minded preconceptions, as well as the skeletons in his own closet.

Series Finale:
Episode #13 — …My Soul to Keep
The Lambda defectors and the Port Moore runaways (team Winston) both want to get on a chopper and get the hell out of jive. Winston’s crew gets distracted by a troupe of ghosts that fall upon them, giving the Lambda trio a window to make their getaway. But it doesn’t go so well: the chopper collides with the force field stretched over Port Moore, flips over, loses control, and collapses on the ground. Getting out of here is going to be harder than anyone imagined.

Landis, Billy, Daphne, Dr. Clark and Roman assemble outside to witness the helicopter fly and fail. They’re desperate to put an end to all this madness. Landis has an idea: if they put the artifact, now completely intact, back into the particle accelerator, maybe it will turn everything back to normal. There’s just one snag. To restart the accelerator, they’re going to need to shut down the power to the rest of the town. So some people are going to need to “die” in order to fend off the ghosts that will inevitably descend on the machine. Landis, Billy, and Val volunteer. They need one more person. Who’s it gonna be? Daphne? Really? Guess it’s gonna be Daphne.

The Chieftain bar erupts in a pre-possible- apocalypse party, and Roman steps out for some air. He’s met by Maggie, who urges him to make up his mind carefully: the spirits are in charge of this town now, herself included. Does he really want to change that, and go back to a town full of people calling him a freak? Food for thought.

The plan gets underway. Dr. Clark mans the particle accelerator, putting his life on the line to vanquish the ghosts. Before they go into the breach, Billy has to tell Landis something: every time he was drawn back from the brink, death took a little life out of him. His arm is starting to deteriorate. This doesn’t bode well. No time to consider contingencies.

Roman sets the machine in motion, and yanks the volunteers’ spirits out of their bodies. They then transport themselves to the accelerator room. Once the particle accelerator room is cleared, Roman inserts a capsule containing the meteorite into the machine. This should do the trick… It causes the accelerator to release a surge of energy that courses through the entirety of Port Moore, and shuts down its power. Except when the accelerator turned on, it didn’t open the portal into the other dimensions like it did the last time for Billy. Hard luck. That’s just when the ghosts start to plot their overthrow. Billy realizes that to reach death’s door, you have to be literally dead. Like, 100% dead. Not this diet-death stuff. Billy offers himself up (yet again), and Dr. Clark kills him as humanely as possible — a nice, juicy shot of serum to a major vein.

Shortly after Clark smokes Billy, he gets to smoking some ghosts who invade the church where the bodies of the other volunteers are being "kept safe". Before Billy steps through the portal of death’s door, he and Roman have a heart-to- heart. Turns out the reason that Billy’s dad wanted to drive Roman’s mom out of town is that Billy got her pregnant… with Roman. So he’s Roman’s dad. And with that, he steps into the other realm. And it looks like Billy’s act of heroism worked. The ghosts have disappeared, all the volunteers return to their bodies (except for Billy’s of course) and there’s laughter and rejoicing and merriment all around. Landis is pretty shook up about the whole thing, because her bf is dead.

And Roman… well, looks like Roman blew Port Moore off. He was tired of being called a freak, and he and Daphne took to the high seas on a yacht. Or is it Daphne? Sure looks like Maggie. Did Maggie sneak into Daphne’s body when she was under? Sure looks like she did. And Roman’s fixing to reap the rewards. (Courtesy Syfy.)
First aired: January 4, 2018.

What do you think? Do you like the Ghost Wars TV series? Should this TV show have been cancelled or renewed for a second season on Syfy?

It was a good show. Why cancel it?

I had such a good time watching this show!
The season was too short – let alone a stupid cancellation!
However, the final episode ended on an awesome note! 😉 😛

I think the show should continue for one more season to show what happens next. If they got out of the forces field or if they got turned around too. I really enjoyed the show.

I totally agree! I’m 60 and I love this show. They keep taking all the scary shows off and it’s really pissing me off!